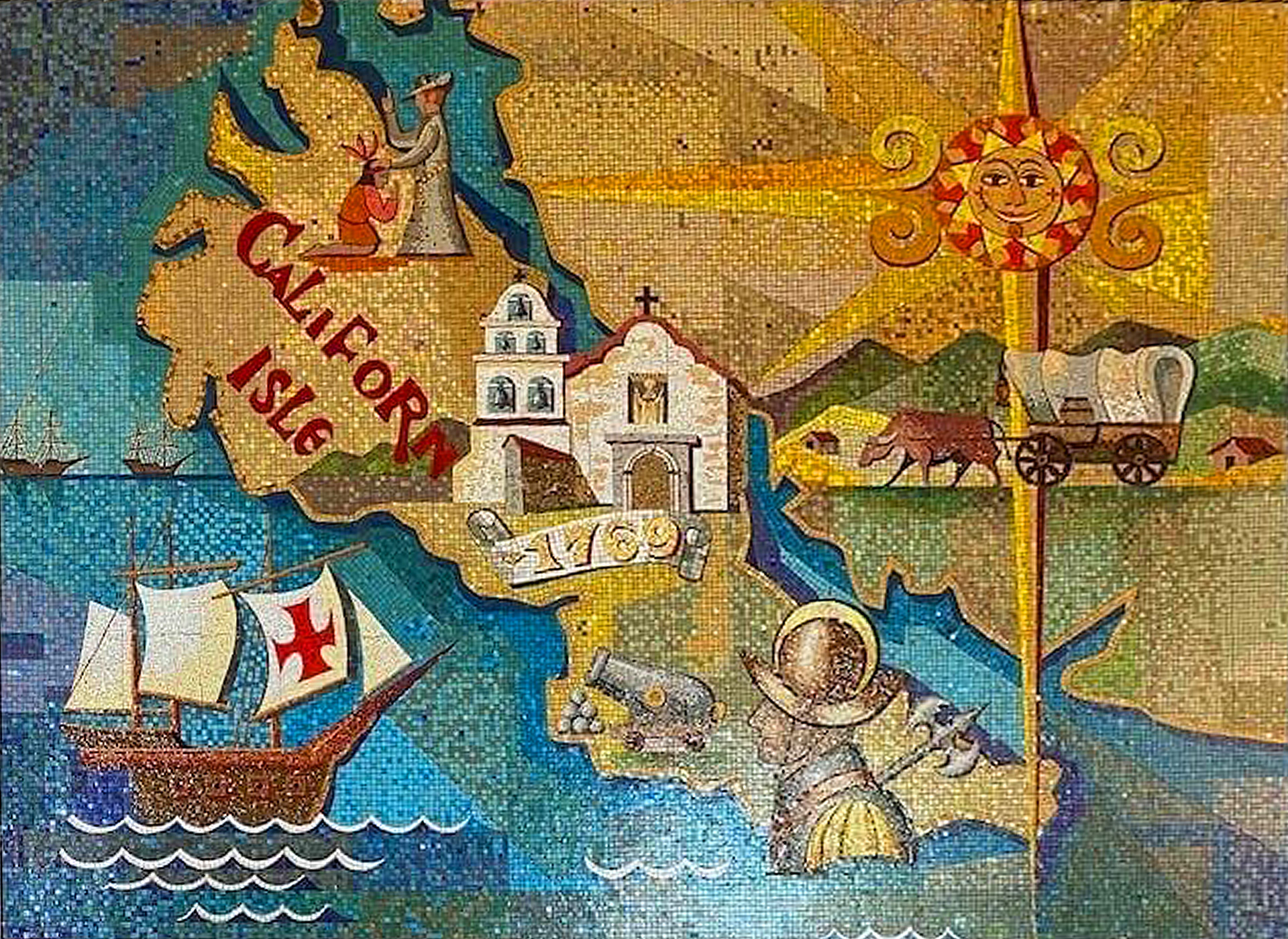 Two midcentury glass tile mosaics celebrating San Diego history and industry are once more on display in the Town & Country Resort Convention Center. The designs have been attributed to German artist Benjamin Mayer.

Charles Brown’s Town and Country Hotel added a convention center to their property in 1969-70. The new Atlas Ballroom foyer included two mid-century glass mosaic tile murals in the mid-century pop style of Millard Owen Sheets, Benjamin Mayer, and Susan Lautmann Hertel (both contemporary associates of Sheets). For decades these were covered over, but re-discovered during the property’s 2017 remodel. Unfortunately, no one contacted at the hotel knew of the original designer. Neither remembered the hotel’s architect, John R. Mock, when asked. “I was busy with the structural details. The Brown family took care of the decoration.” 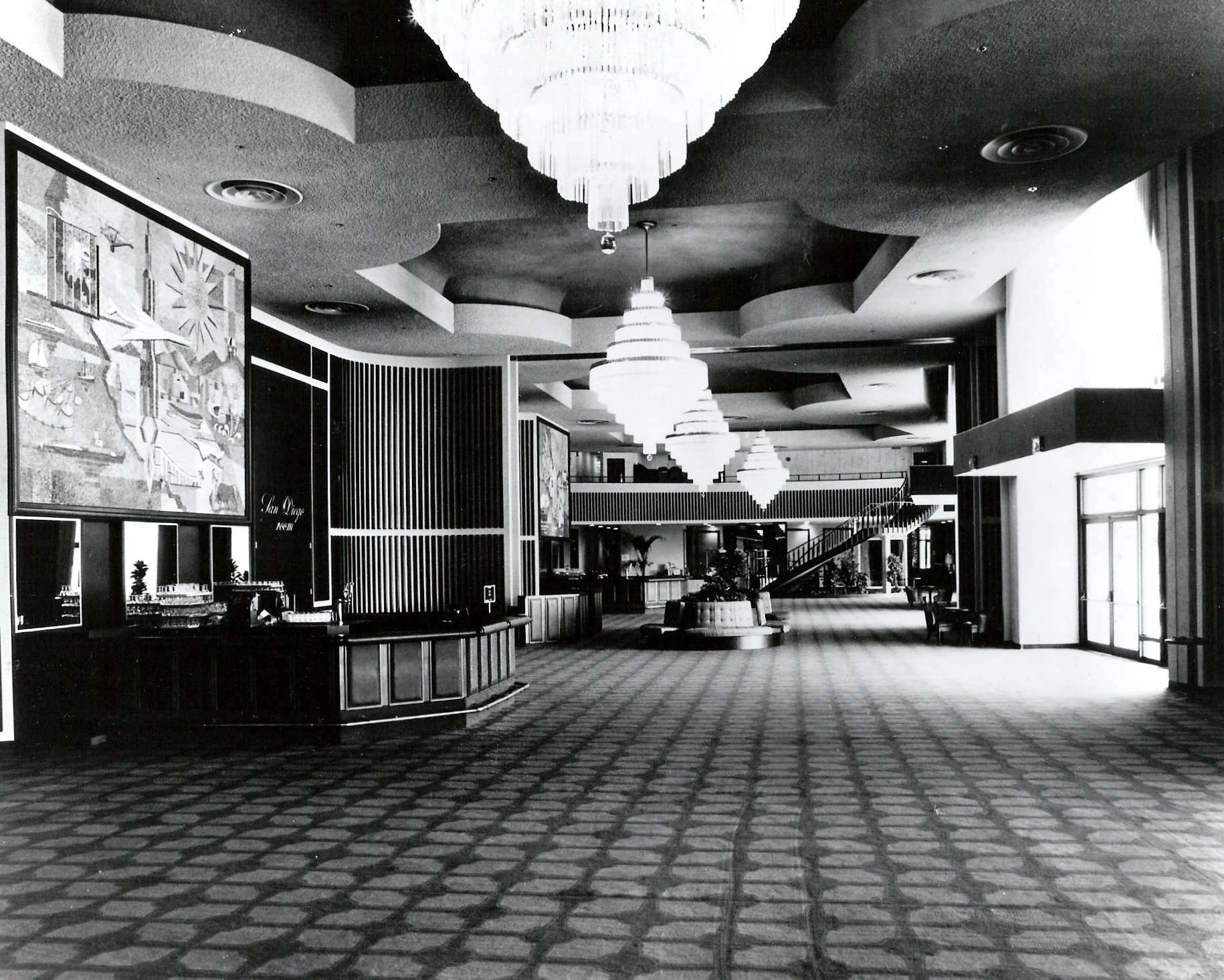 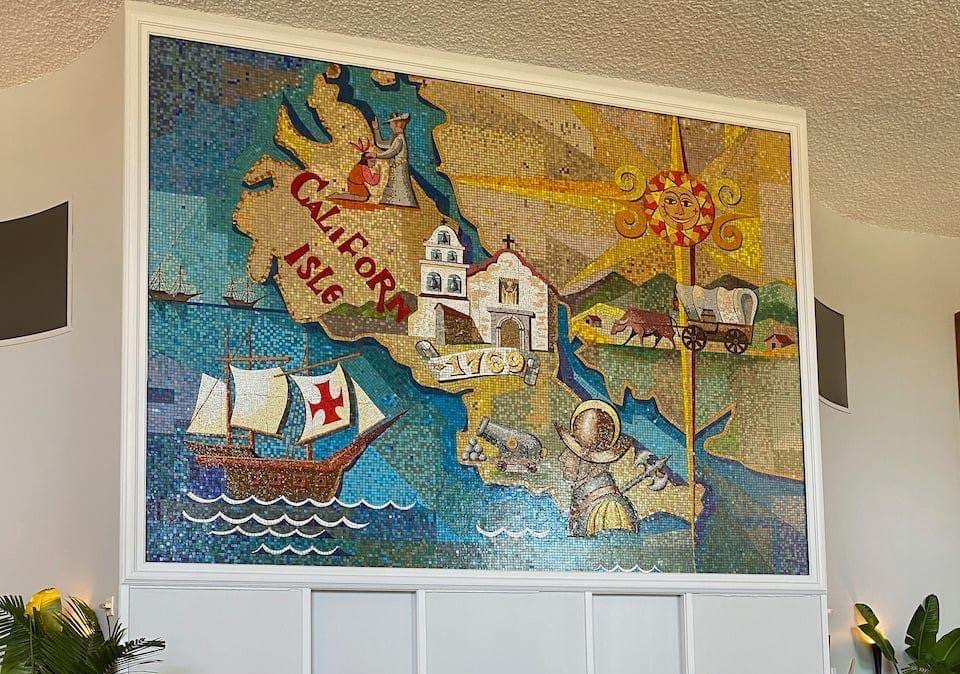 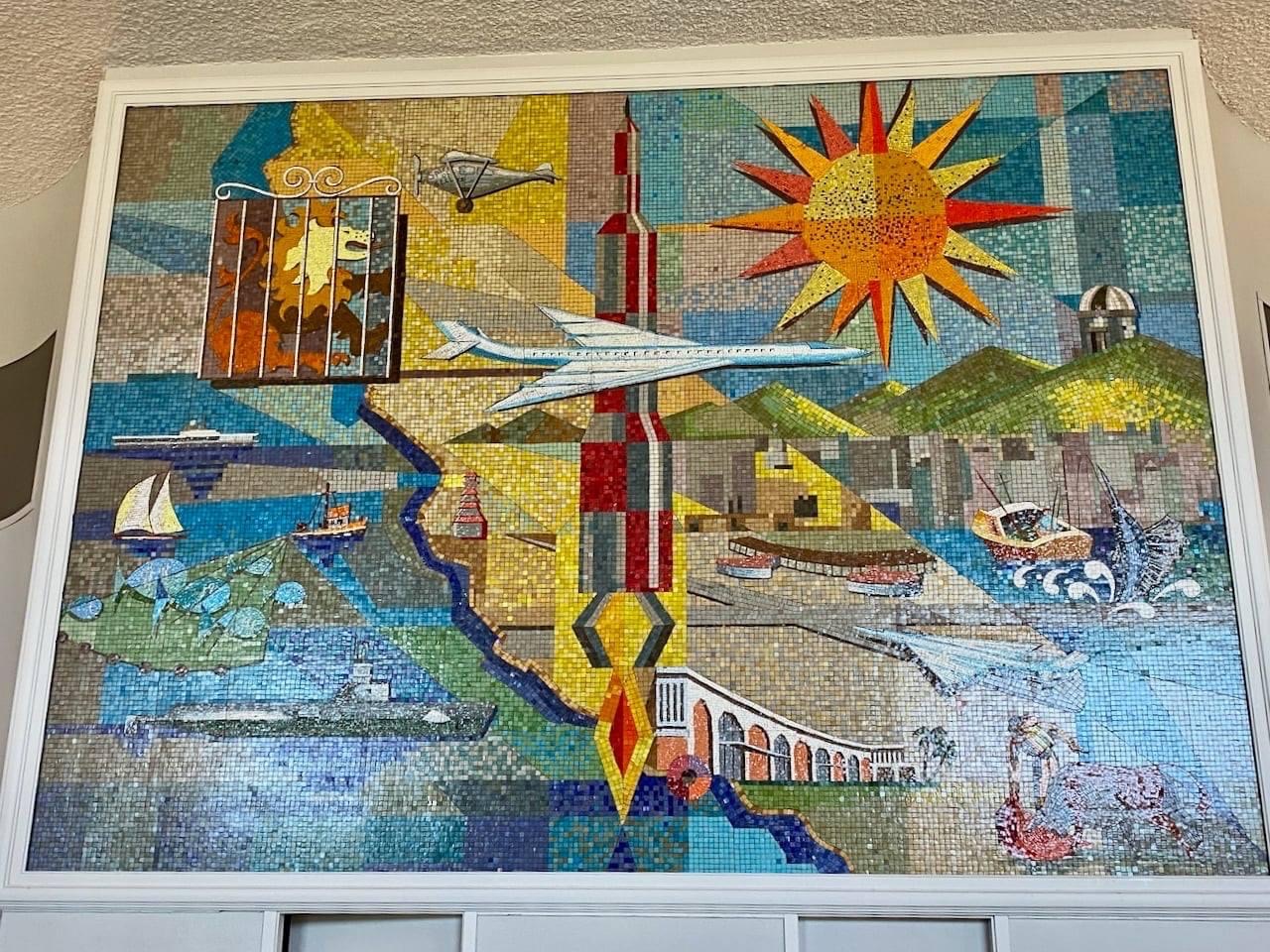 So who created them? Lemme tell ya…

New research has attributed the work to German artist Benjamin Mayer (1925-1999), whose Norwalk Regional Library murals from 1968-1969 they closely resemble. 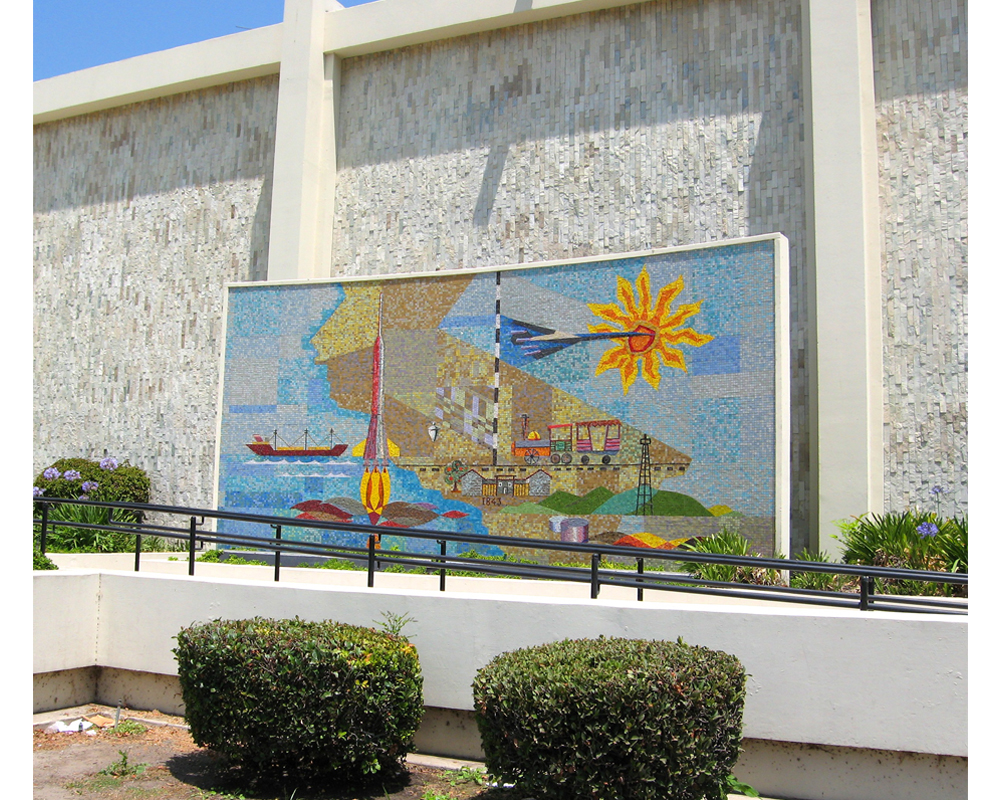 Kurt Erich Mayer was born in Heilbronn, Württemberg, Germany, in 1925. Like many artists, he escaped Nazi Germany, ending up in Palestine, where he changed his name to Benjamin. Mayer studied at All Saints School of Art in Manchester and the Royal College of Art in London as a young man. In 1949 he emigrated and became a US citizen in 1952. 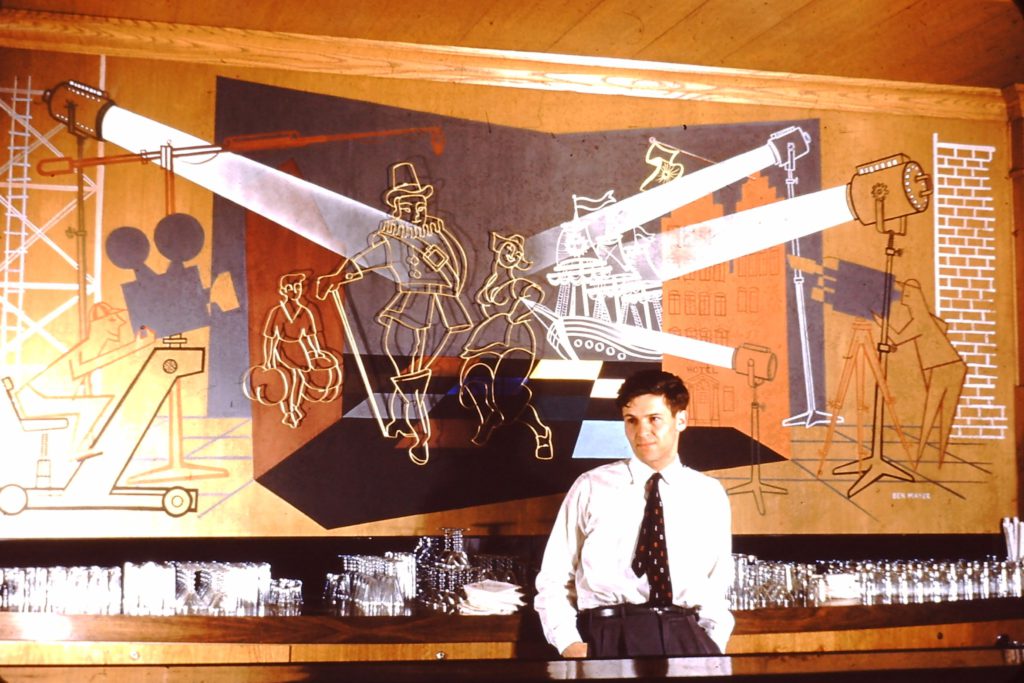 Arenson brought in independent mosaic expert Lillian Sizemore for a forensic opinion. She focuses on the work of Mayer and his partners. Stylistically and construction-wise, Sizemore agreed that Ben Mayer designed the Town and Country murals. “The murals employ the same materials used in his other works,” says Sizemore, pointing to “the use of whole, square vitreous glass tile known as ‘Venetian’ by the Sheets studio.” He could have even used the same preparatory drawings as a basis.

The consensus points to Ben Mayer as the designer. In the meantime, we’ll have to look for definitive proof. You never know — Charles Brown may have hired local artisans to reproduce the Ben Mayer style… 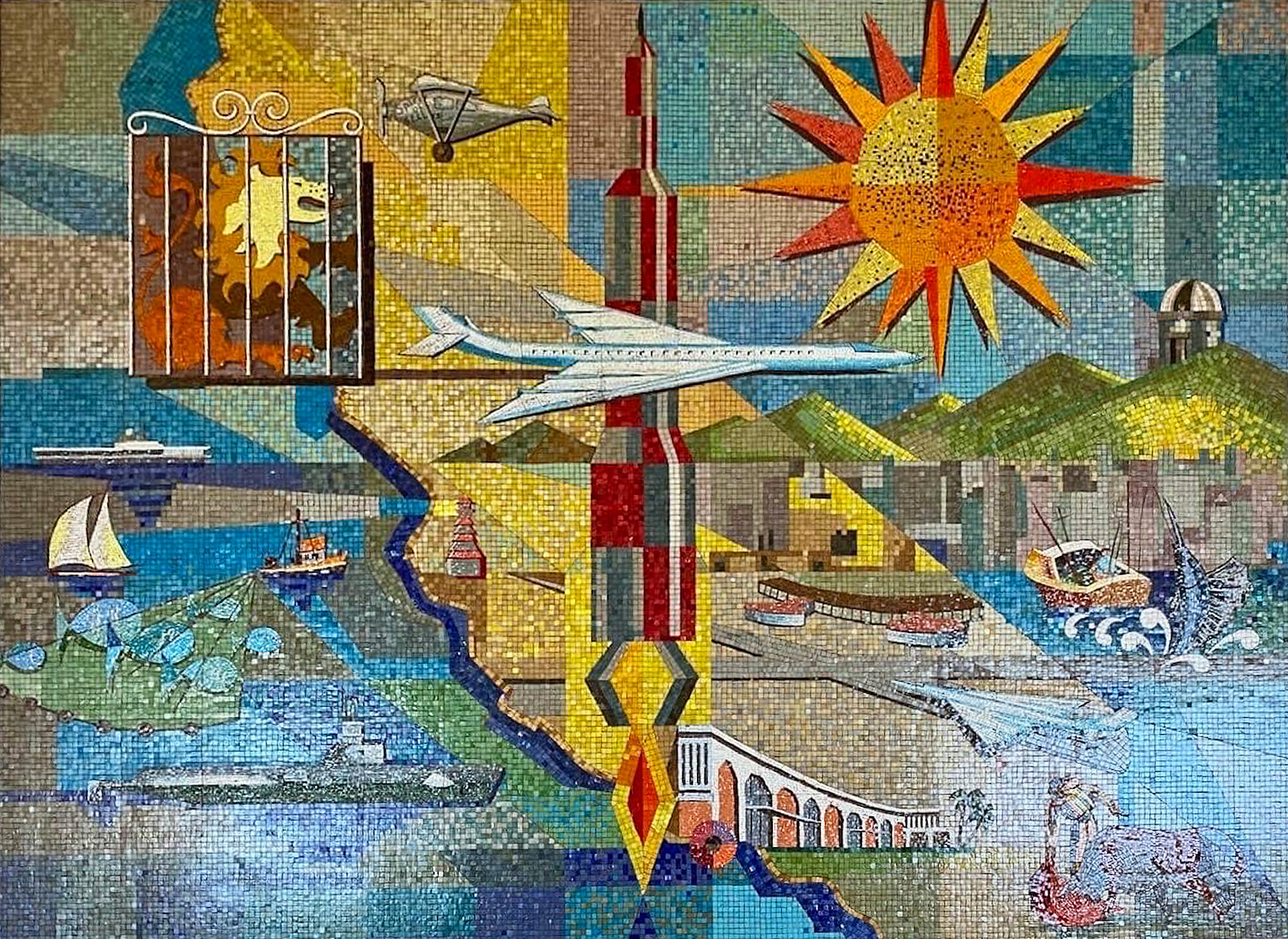 After presenting a lecture on the history of Hotel Circle for Tiki Oasis, I was asked the about the mosaic tile murals recently uncovered in the Atlas Ballroom at Town and Country Hotel. No one I contacted from the hotel knew of them, and neither remembered the hotel’s architect, John R. Mock, when I asked. “I was busy with the structural details, the Brown family took care of the decoration…”

I suspected they were created by Millard Sheets, Ben Mayer, or Sue Hertel (both associates of Sheets), as one closely matched that of Benjamin Mayer’s Norwalk Library mural, as pointed out by Lori Jones and Sven Kirsten.

I contacted Catherine Hertel, Sue Hertel’s step daughter, and Adam Arenson, Sheets’ biographer. Both confirmed the murals were not designed by Sheets. Arenson suggested Mayer, as the Town and Country murals were “definitely” in his style.

So I got ahold of Ben Mayer’s son, Quinn, who agreed his father’s murals were “quite similar to the San Diego project.” Quinn and his son Shawn carry on Benjamin Mayer’s tile business with Envel Design Corporation. Quinn could not definitively say they were designed by his father.

In the meantime Arenson brought in independent mosaic expert Lillian Sizemore for a forensic opinion. She focuses on the work of Mayer and his partners. Stylistically and construction-wise, she ventured to say that the Town and Country murals were designed by Ben Mayer.

“It appears the murals employ the same materials used in his other works, that is, the use of whole, square vitreous glass tile (known as ‘Venetian’ by the Sheets studio). More specifically they exhibit similar setting treatment and color-blending techniques. They heavily reference the subject matter and stylization of the Norwalk (CA) Regional Library murals (c. 1968-1969). We see the sun/compass rose, historical references of maps, navigation, Spanish armada and missions, similar use of color blocking and lettering styles. It is as if aspects of the same cartoons (preparatory drawings) were used for both Norwalk Library (1969), and later, Town and Country Hotel (1970-75?) though slightly altered for the T&C twin murals.”

“Mayer also did a large architectural commission for the LAPD (1977), with Adrian Wilson Assoc. Architects. It is extant and located in Skid Row. Again, there is a signature use of the whole square vitreous glass tile, color blocking abstractions and blending mixes, and it also includes missions and horses in the background. That work is clearly signed BEN MAYER. I don’t know if he also executed the setting and installation himself, or used fabricators…”

The consensus of opinions points to Benjamin Mayer as designer. In the meantime, we’ll have to look for signatures in the tilework, or see if the Town and Country has any records or revelations. You never know, Charles Brown may have hired local craftsment to reproduce the Benjamin Mayer style…