The Hula Hut (1946-1965) was a Hawaiian-themed pre-tiki bar in the very same location of Jack Ewing’s Tropic Cafe in the old Gates Hotel building on Third, across the street from the U.S. Grant Hotel.

That old downtown area – sailor’s row — had been deteriorating for awhile, and business was slowing. San Diego did not have the same number of thirsty aircraft workers it once had at the peak of the war. But there was always an influx of Navy men and Marines looking for a good time.

They renamed Jack Ewing’s Tropics bar at 1036 Third, and opened up the adjoining nightclub at 1040 Third as The Cuckoo Club.

For years the Matrangas and Mirabiles bought, sold and operated many San Diego and Tijuana bars, restaurants and clubs. They had the whole street under their control. They had a way with liquor licenses…

In 1947 The Hula Hut was raided by police and 23 people were arrested for illegal gaming. The Matrangas had a dice game going in the bar. Law enforcement received a tip — someone overheard the woman running the game brag about taking in over $5000 a night. So the police arrested everybody, including innocent bar patrons, and sorted it out later downtown. 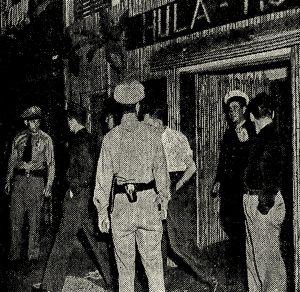 Under San Diego gaming rules at the time, a dice game for prizes of, say, free drinks to the winner, was allowed. But cash prizes were unlawful.

Local officials wanted to redevelop the area into a new City Center. There was even a proposal by designer/planner Al Goodman and others to tear out the old Horton fountain and modernize the entire Plaza.

In its place, they built the 25-story Westgate Plaza Hotel. Where The Tropic Cafe and The Hula Hut once were, is now the Westgate Gourmet Shop.