With its proximity to the crashing waves of the Pacific Ocean, The Marine Room restaurant has become a classic, well-loved landmark in San Diego County. Did you know its history starts way back in 1916? 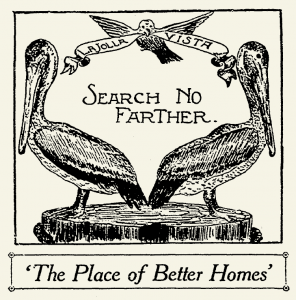 It was established by Scotsman Captain Peter McDowall Hannay (1872-1943) as The Spindrift Inn, a four-bedroom roadside inn and restaurant overlooking Spindrift Beach, now La Jolla Shores. Hannay was a retired captain of the Scots Territorial Guard. He and his wife Margaret settled in ‘La Jolla Vista,’ establishing the Inn as a rendezvous for travelers, writers and stars visiting from Hollywood, and as a cultural and social center for locals. They were known for their chicken dinners and very local seafood — their lobster salad used California spiny lobster just ‘a stone’s throw’ from the Inn! 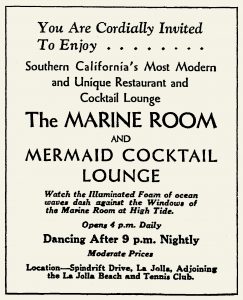 Kellogg planned to change The Spindrift Inn into a restaurant, but died on a trans-Pacific cruise to Japan in 1940, before the remodel was completed. Instead, his son, William Scripps “Bill” Kellogg, resumed work and finally opened the restaurant under its new name, ‘The Marine Room.’ Its “soft” opening was on May 26, 1941, and preview dinners were held for La Jolla Beach and Tennis Club members, friends and family until the grand opening, May 29, 1941. The opening day menu featured fresh lobster a la Newburg in the shell for $1.35, rainbow mountain trout sauté amandine for $1.25, and martinis for 35 cents!

From 1940 until he retired in 1973, Bill Kellogg directed operations of La Jolla Beach & Tennis Club, the Sea Lodge Hotel, the Playa del Oro Apartments, the F. W. Kellogg Building, 20 championship tennis courts and The Marine Room restaurant. The properties are still held by the Kelloggs and run by fourth generation family members. 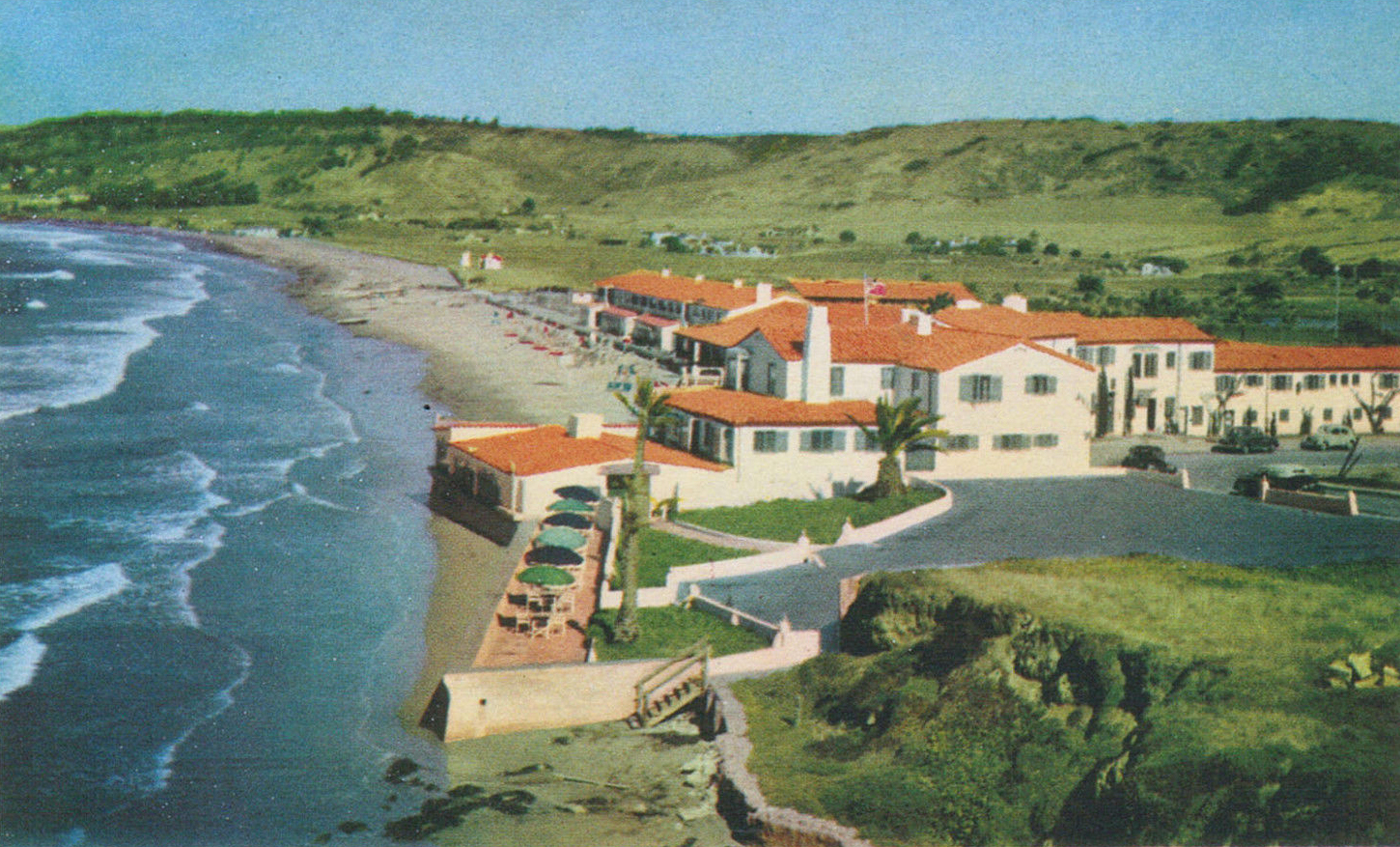 The Marine Room quickly became famous for pounding surf creating dramatic displays outside the original, single-pane windows. However, these windows were no match for the strong surf, so the room was boarded up during winter storms.

When the Spindrift Lounge was added in 1948, the original glass was replaced with thick tempered glass which much better withstood the ocean’s constant assault. The restaurant was marketed as The New Marine Room. 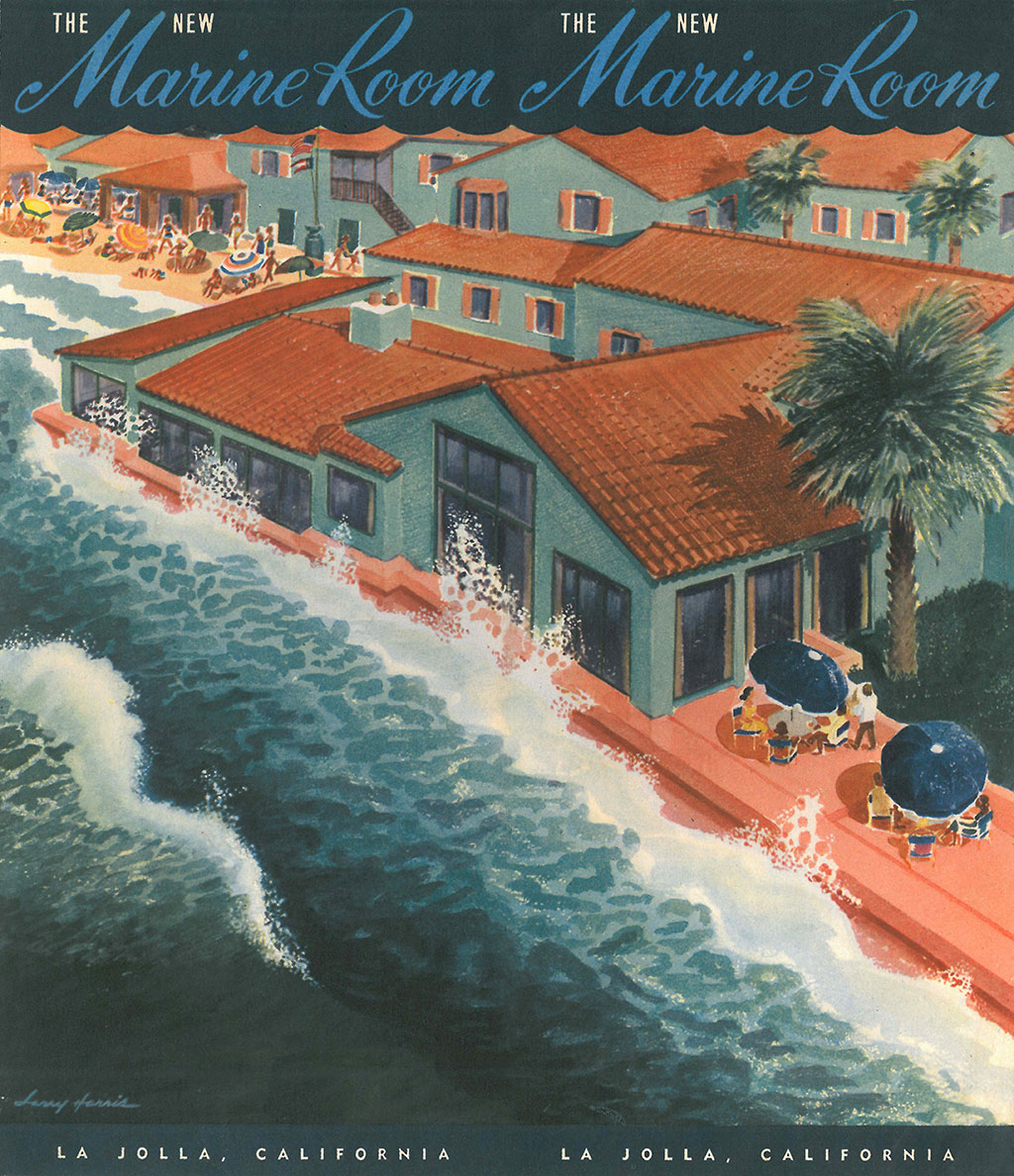 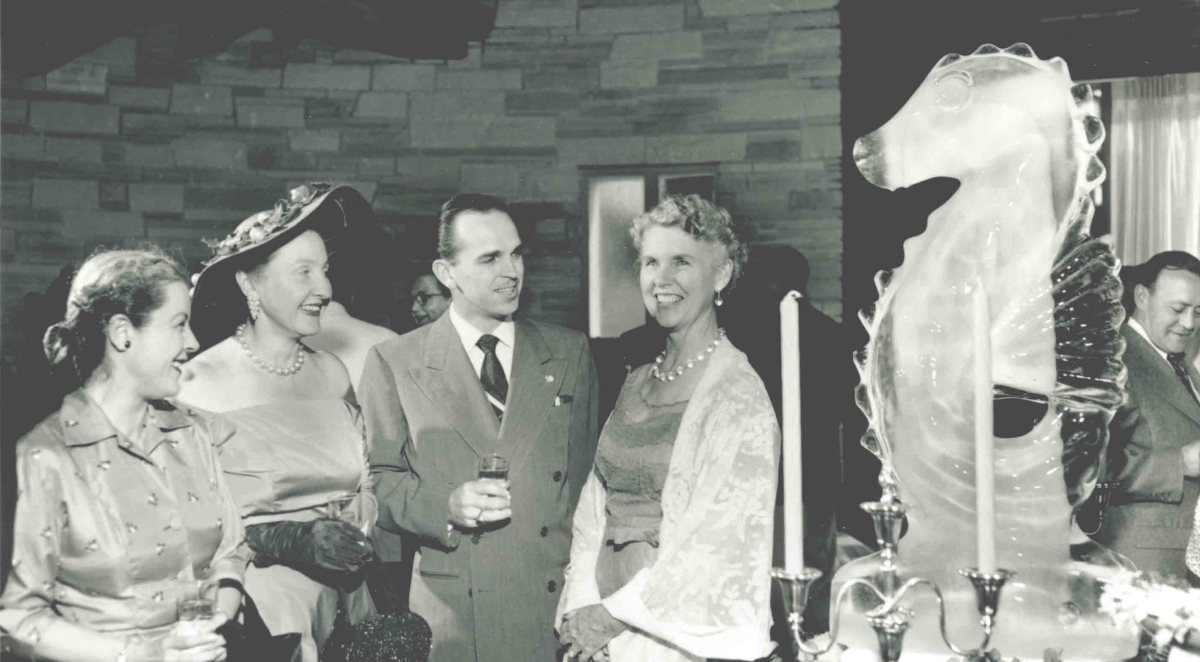 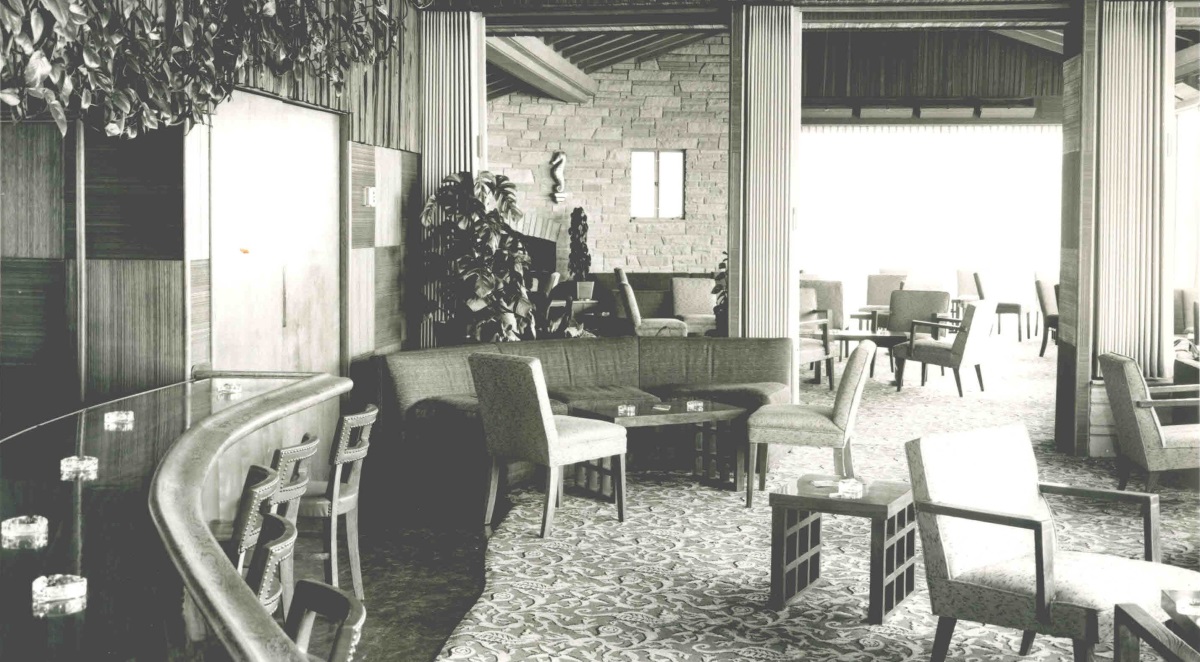 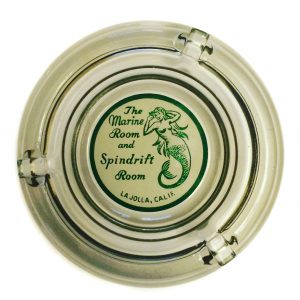 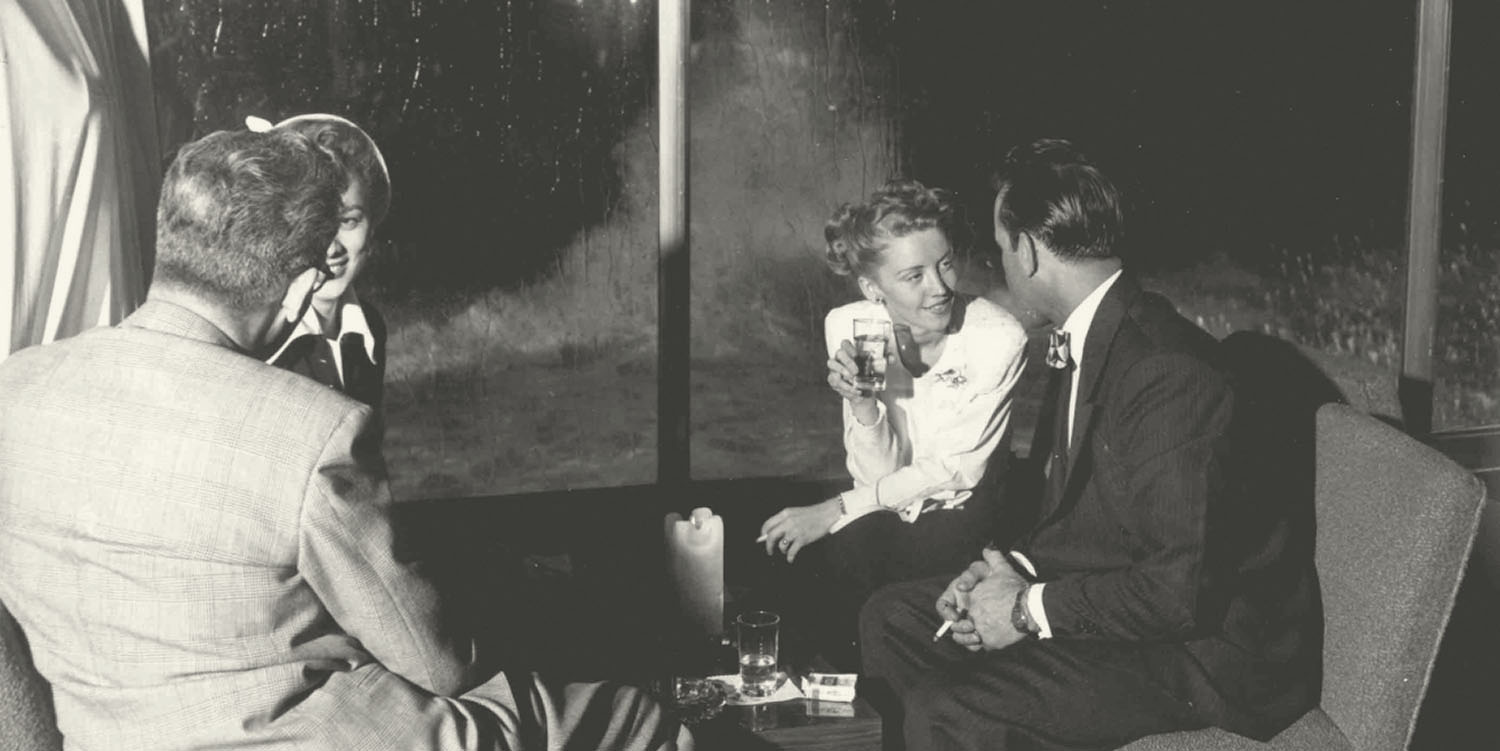 Having a few drinks at The Marine Room during high tide, 1950.

“Cuisine of the ‘New Marine Room’ which is open for both luncheons and dinners, compares favorably with other world famous restaurants. A varied menu offers moderately priced full course dinners, or a la carte specialties designed to please the most exacting gourmet. Only the finest wines and liquors are served. No trip to La Jolla is complete without a visit to the ‘New Marine Room.’”

A major series of storms hit San Diego during the El Niño conditions of 1982 and the waves broke their way in, flooding the The Marine Room. After a nine-month remodeling project the restaurant reopened.

Here is the recipe for Maine Lobster Bisque with Enoki Mushrooms and Apricot Brandy, by Executive Chef Bernard Guillas of The Marine Room, La Jolla, California. Chef Bernard’s recipe calls for Maine lobster, but if not available you might use California spiny lobster. (Just don’t let him catch you!) For more recipes by Chefs Bernard and Ron Oliver, see their cookbooks, Two Chefs, One Catch and Two Chefs, One Pan. 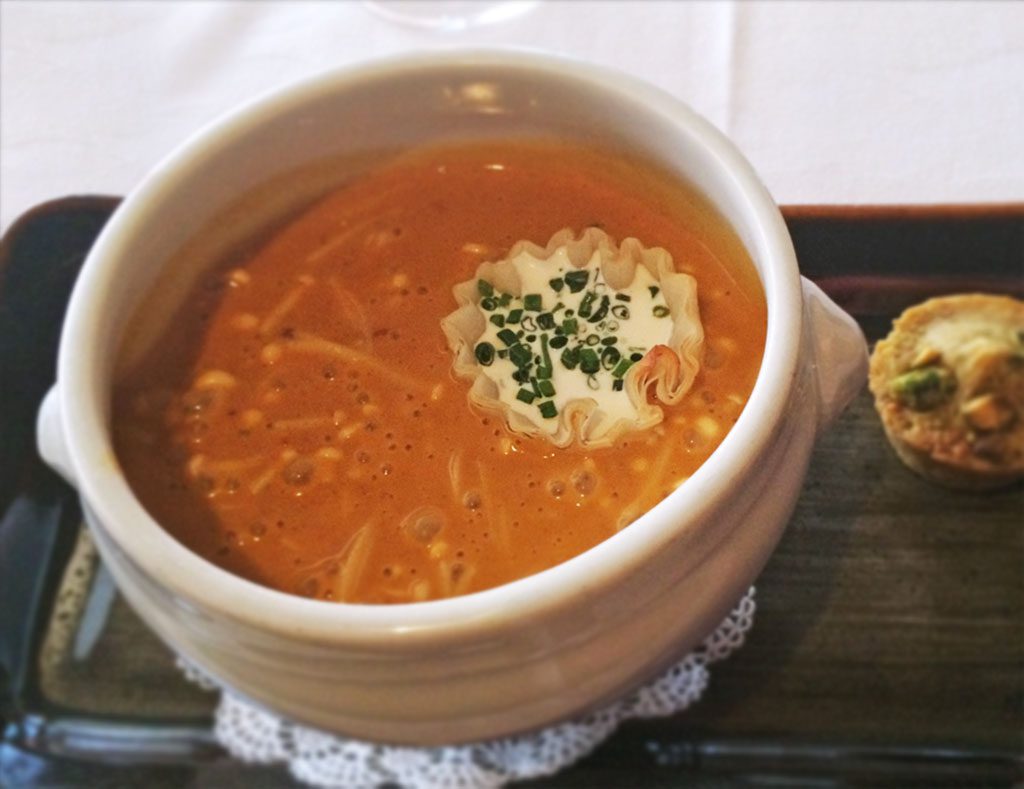 ‘four-bedroom roadside inn’ “About Us,” The Marine Room, website, <http://www.marineroom.com/>.

‘until he retired’ “About Us,” La Jolla Beach & Tennis Club, website, <http://www.ljbtc.com/about/>.

4 thoughts on “The Marine Room”