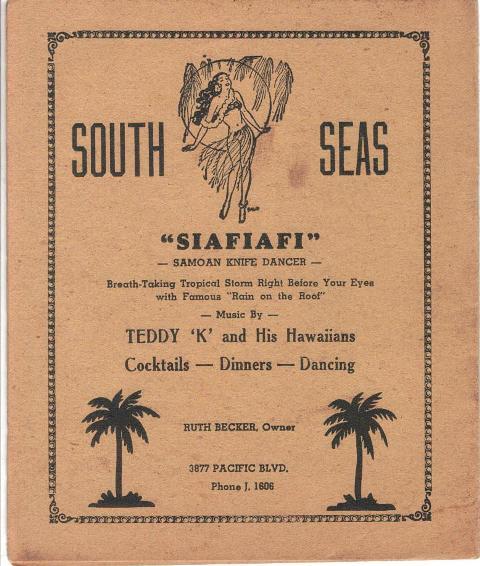 The South Seas Cafe not only had the distinction of being the first large tiki restaurant in San Diego — it was a woman-owned business. Opened Saturday night July 10, 1937 by Ruth W. Becker and Charles Thomas, South Seas Cafe was located across from the San Diego Marine Corps Recruit Depot on Pacific Highway.

“We feel sure that the atmosphere of the ‘South Seas’” said co-owner Charles Thomas to the press, “in which we produce lightning, thunder and the beating rain of a tropical storm, will delight seekers of the unusual. The South Seas illusion will be enhanced by Tahitian portraits and figure studies, done by Leeteg. The haunting rhythms of Hawaii will be produced nightly by steel guitars and ukuleles in the capable hands of Stone’s Hawaiians.”

Consolidated Aircraft Corporation’s newly-built production facility nearby provided a busy lunch crowd. And the novelty of an indoor rainstorm with thunder and lightning drew in as many patrons as could fit in the Tahitian-inspired restaurant. Their collection of ‘figural studies’ by painter Edward Leeteg certainly didn’t hurt, either.

Top it off with thick steaks. Fried shrimp. Rum drinks. Entertainment by Stone’s Hawaiians, Teddy ‘K’ and his Hawaiians, Benny Kealoha and his famous ‘Echo Song.’ Comedy by Our Gang actor Spec O’Donnell. It was the best!

The next year they hired Morley Hiref Golden — who would later build the San Diego Community Concourse and Mission Valley Shopping Center — to remodel, adding a dance floor.

By 1941 Charles Thomas had moved on, developing several bowling alleys including the art-deco Pacific Recreation facility at Couts and Pacific Highway. His bowling palace was said to be a modern marvel, with electric scorecasting and foul detectors. ‘One of the most attractive features,’ wrote a local newspaper writer, ‘is fluorescent lighting, providing daylight illumination.’ 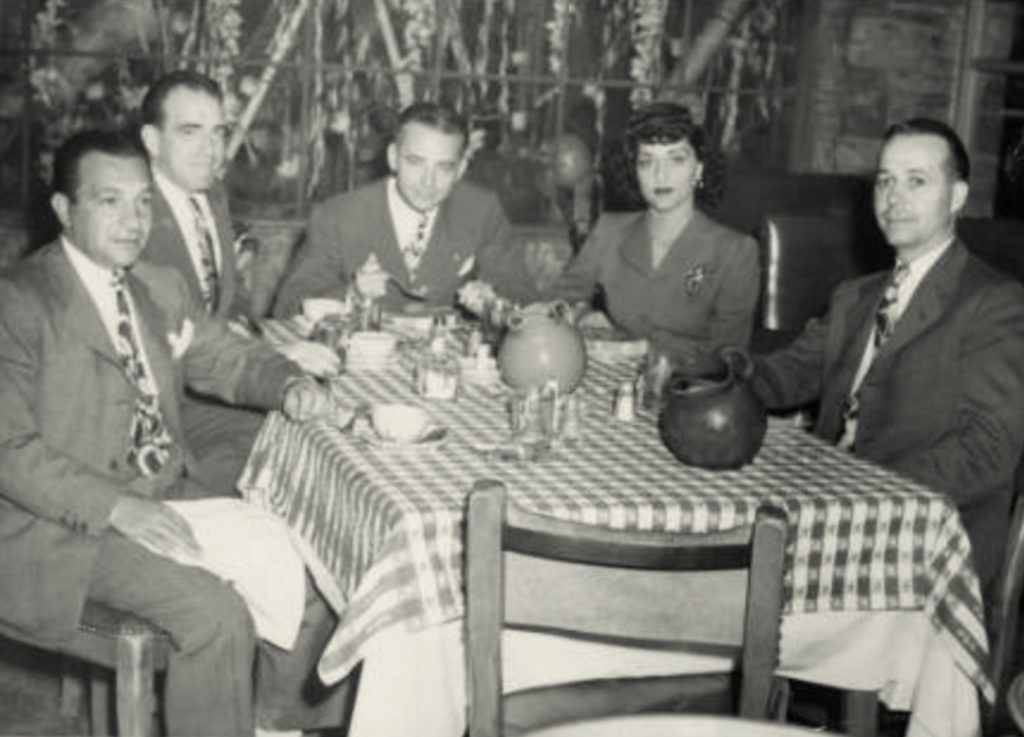 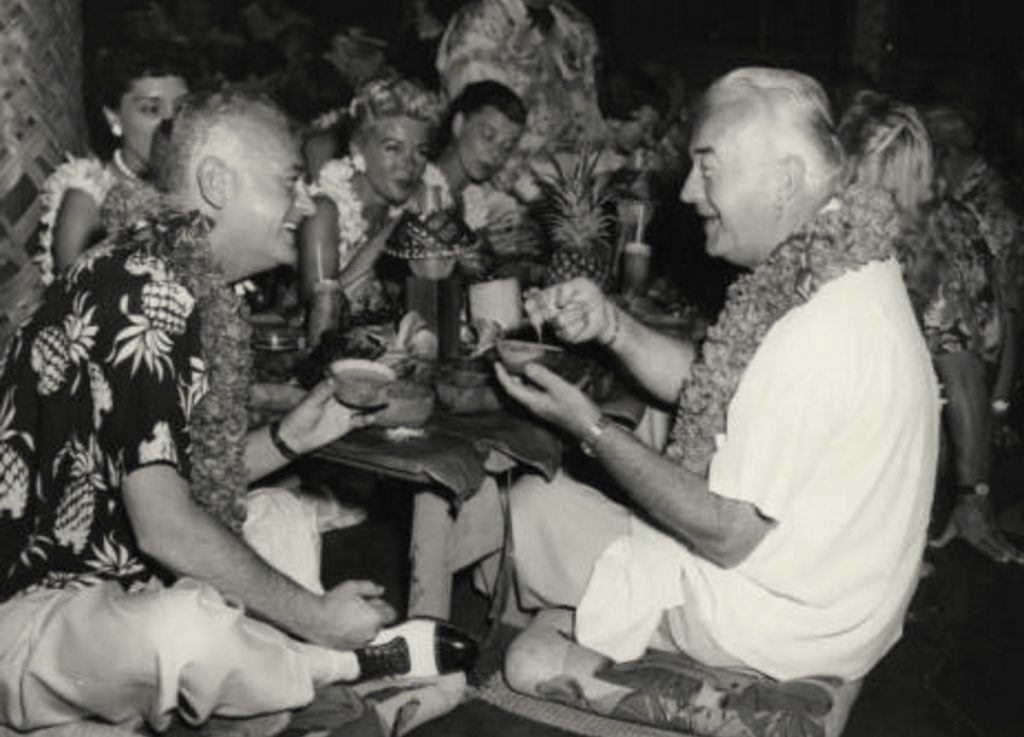 Along with the Leeteg paintings down in the bar, they prominently featured an 11-foot-tall black velvet nudie by Morris Levine in the upstairs dining area, and on their menus. The Levine was reportedly won in a Las Vegas dice game bet by Wilbur Clark. 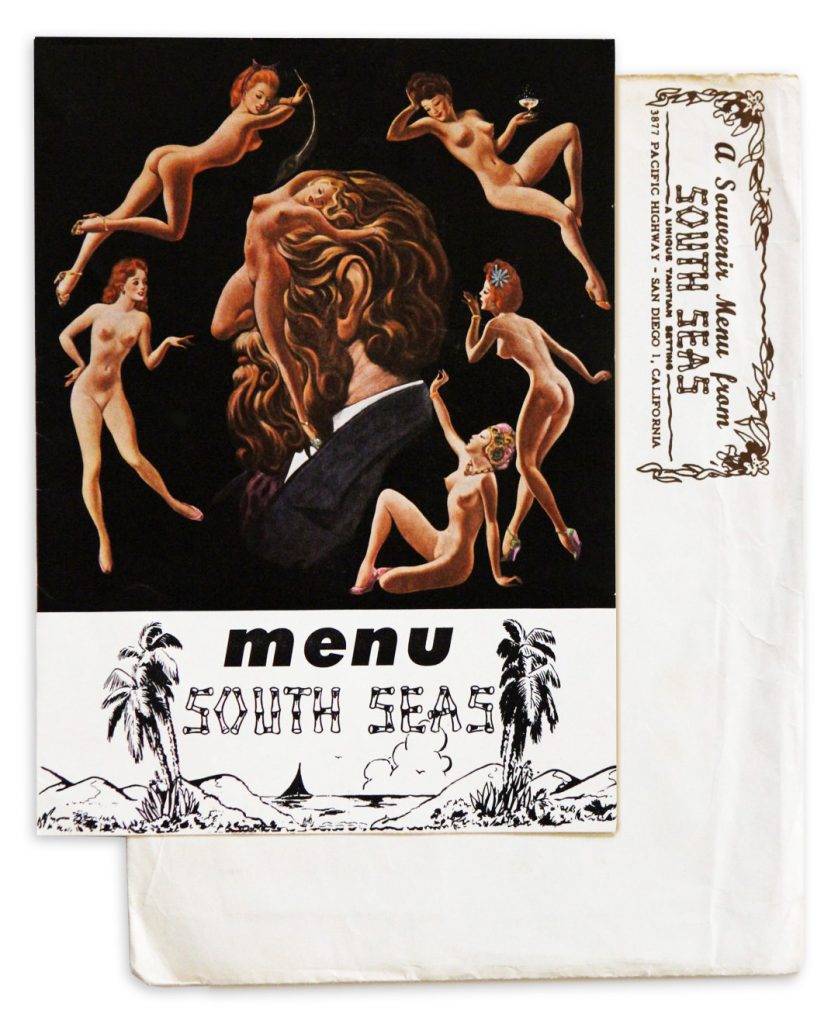 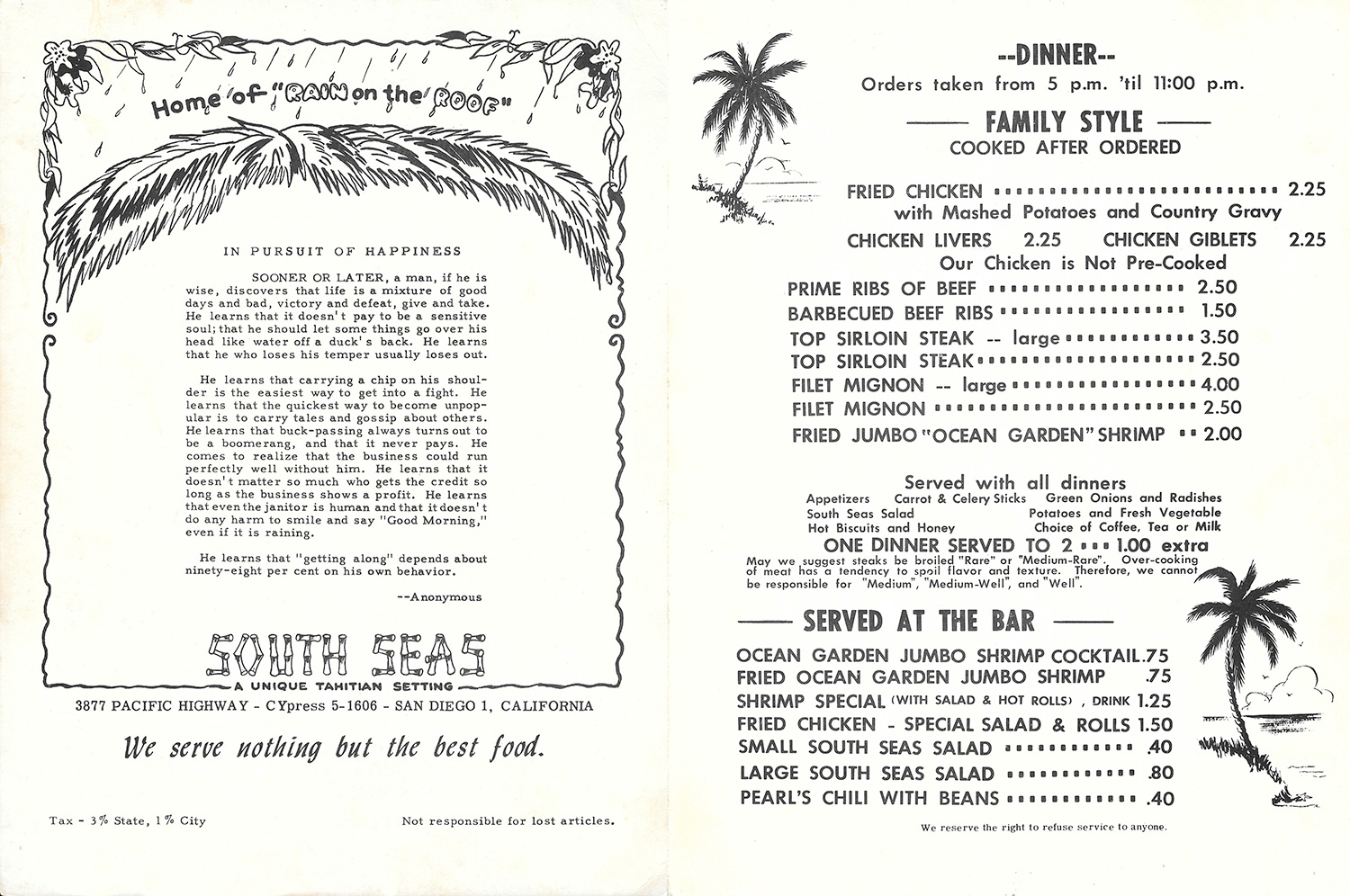 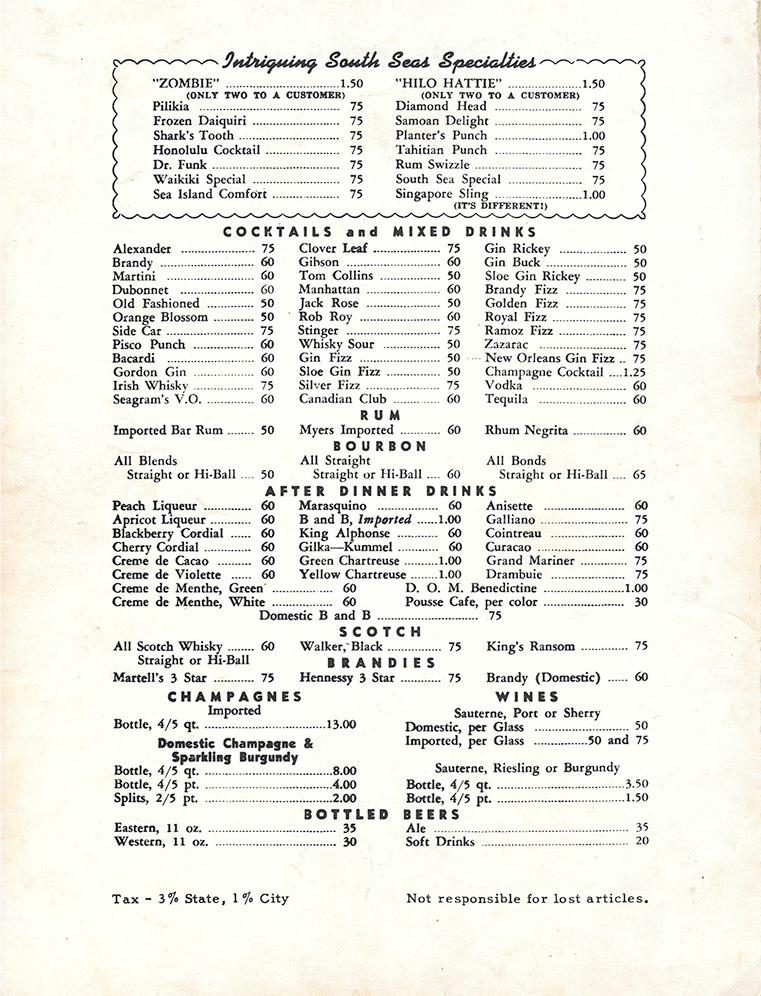 Len Barcom ran the show from 1947 until he retired in 1964. The amiable host had quite a penchant for practical jokes… In 1961 while golfing with some buddies, one of them shot a ball through a nearby window. They made their getaway and all thought it was forgotten. Except Len.

Two weeks later, mutual friends invited the shooter Fred Antelline to the South Seas for lunch. They were seated near a stranger swaddled in head bandages, who was overheard to say he’d lost an eye by a golf ball. Antelline felt so guilty he offered pay the man’s health bills and who knows what else. Barcom let it go as long as anyone could stand, before revealing the prank. Antelline bought a round of drinks for the house, it cost him $25! 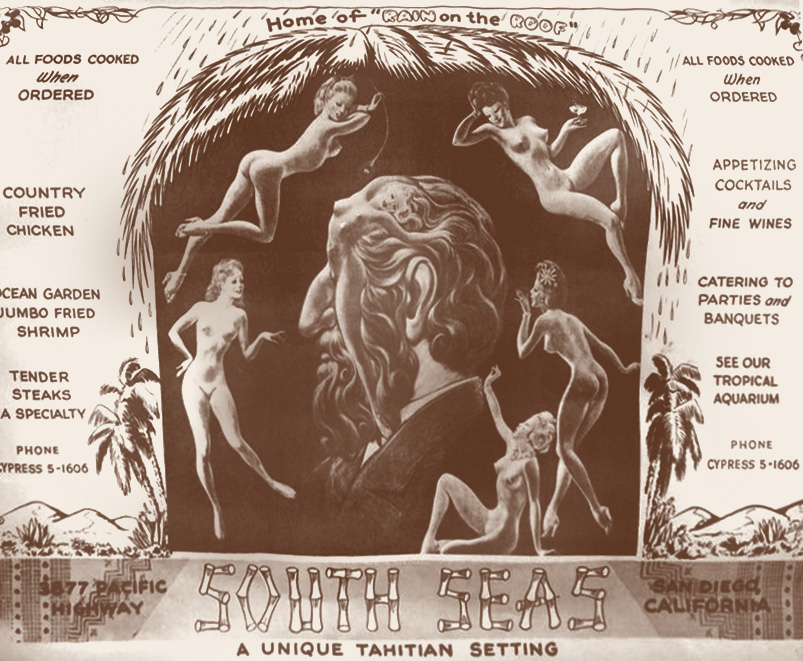 After Harold Clark retired and sold in 1968, the club went through a series of owners. Among them were developer M. H. Golden and restaurateur George De Vos and partners (Valley Ho, The Fishmonger).

The South Seas closed in 1977 and was replaced by a ladder store. For years it was a GolfMart, and now [2016] it’s part of an AMVETs thrift store properties. 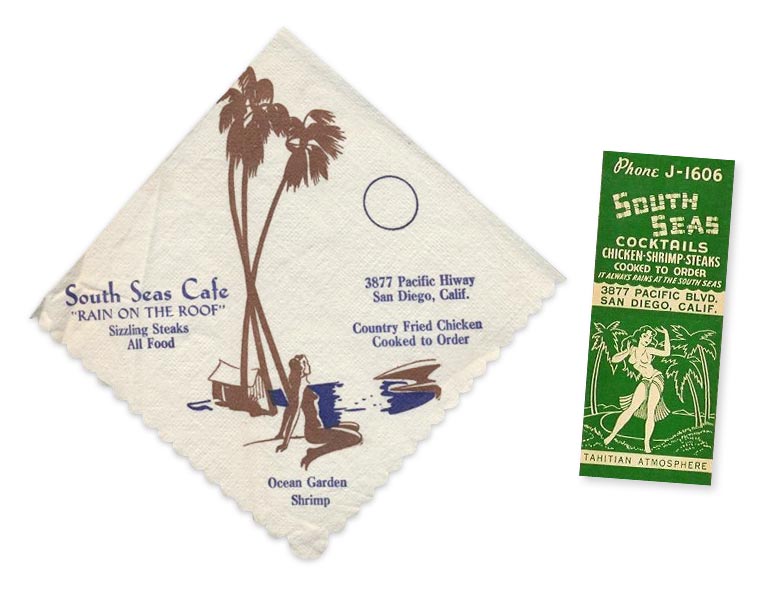