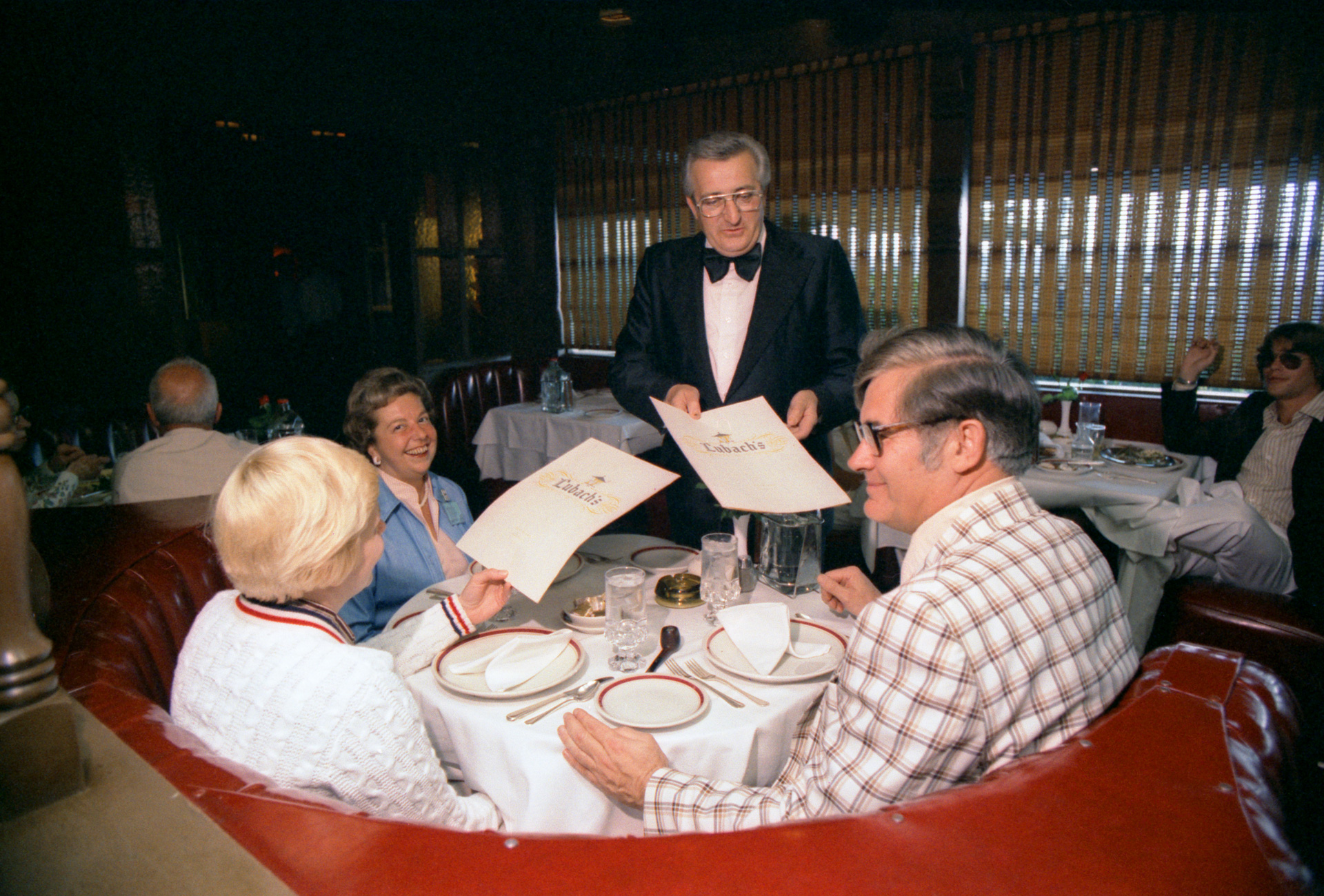 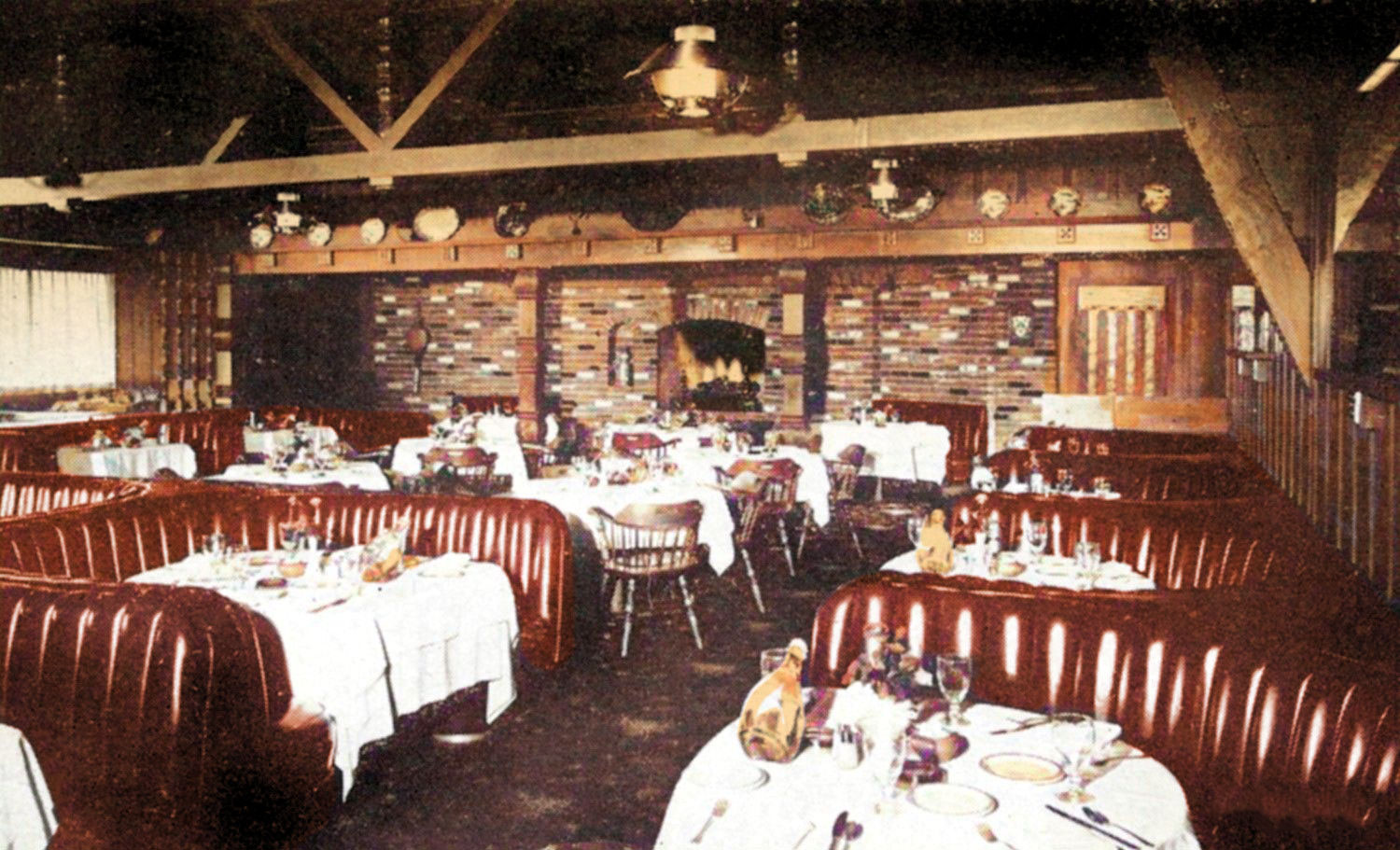 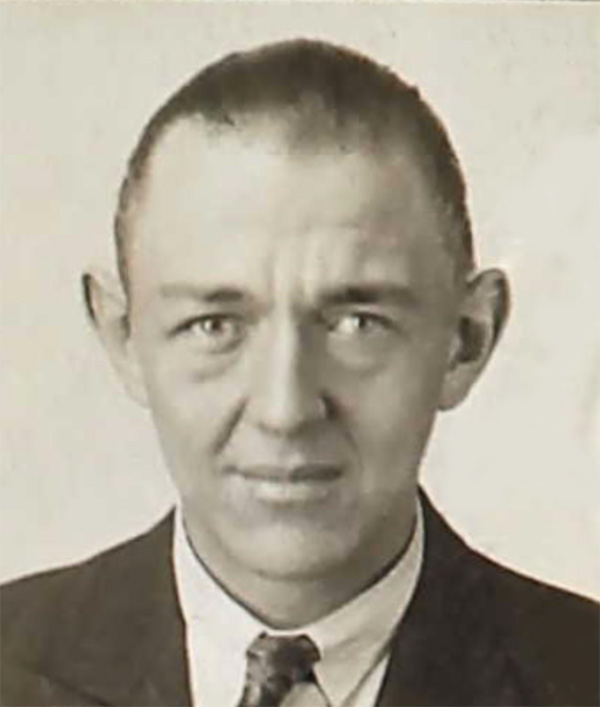 Down on the waterfront, the one-story red and white framed building sat at the foot of Hawthorn Street and Harbor Drive. The front was decorated with a small fishing boat, cobblestones, nets, lobster pots, and white a picket fence. Very Cape Cod. Very San Diego.

The building was sub-leased from Solar Aircraft Company, on land owned by the Port of San Diego. Its tenants had previously been Maurice Bernardini’s Cafe (Bernardini was known for Ye Golden Lion and Cafe Cabrillo), and Henry Langhorst’s Cafe. At one time, it was even Solar Aircraft’s executive dining room and cafeteria.

Restaurateur Rinse Cornelus Antonius (“Ray”) Lubach (1911-1994) immigrated from the Netherlands to America in 1937, and started out digging ditches while learning English. The tall Dutchman soon earned jobs in the L.A. restaurant business, rising to a top position at Romanoff’s.

In 1951, Lubach was food and beverage director at the U.S. Grant Hotel and opened the Grant Grill with Grant owner Joseph W. Drown. The Grill ingratiatingly supported the businessman’s lunch — it was initially open to women only after 6pm daily. (Slowly that ban got whittled down to 3pm and removed entirely in the early 1970s, but that’s another story…)

Five years later, Lubach and a group from the hotel formed U.S. Grant Associates partnership to develop their own side project, once again catering to that power-broker crowd they came to know from the Grill. Partners were Lubach, Drown, U.S. Grant manager Carleton Lichty, and Mitchell Yrigowen. Lichty’s first job was as a 13-year-old bellboy at the Grant. In 1961, John Alessio purchased the Hotel del Coronado and asked Lichty to be its manager.

Lubach’s Restaurant opened in March, 1956 and was an immediate success. Lubach kept his position at the U.S. Grant until 1958 when he also opened Luby’s, his family-style restaurant in Pacific Beach.

The harborside Lubach’s Restaurant, like the Grant Grill before it, wrote a local newspaper, “proved to be a magnet for the power-lunch set and a favorite of San Diego’s old guard for decades…” Over the years, they entertained many celebrities including Cary Grant, Bob Hope, and the Pope.

A Lubach’s menu from 1959, remained virtually unchanged for decades. 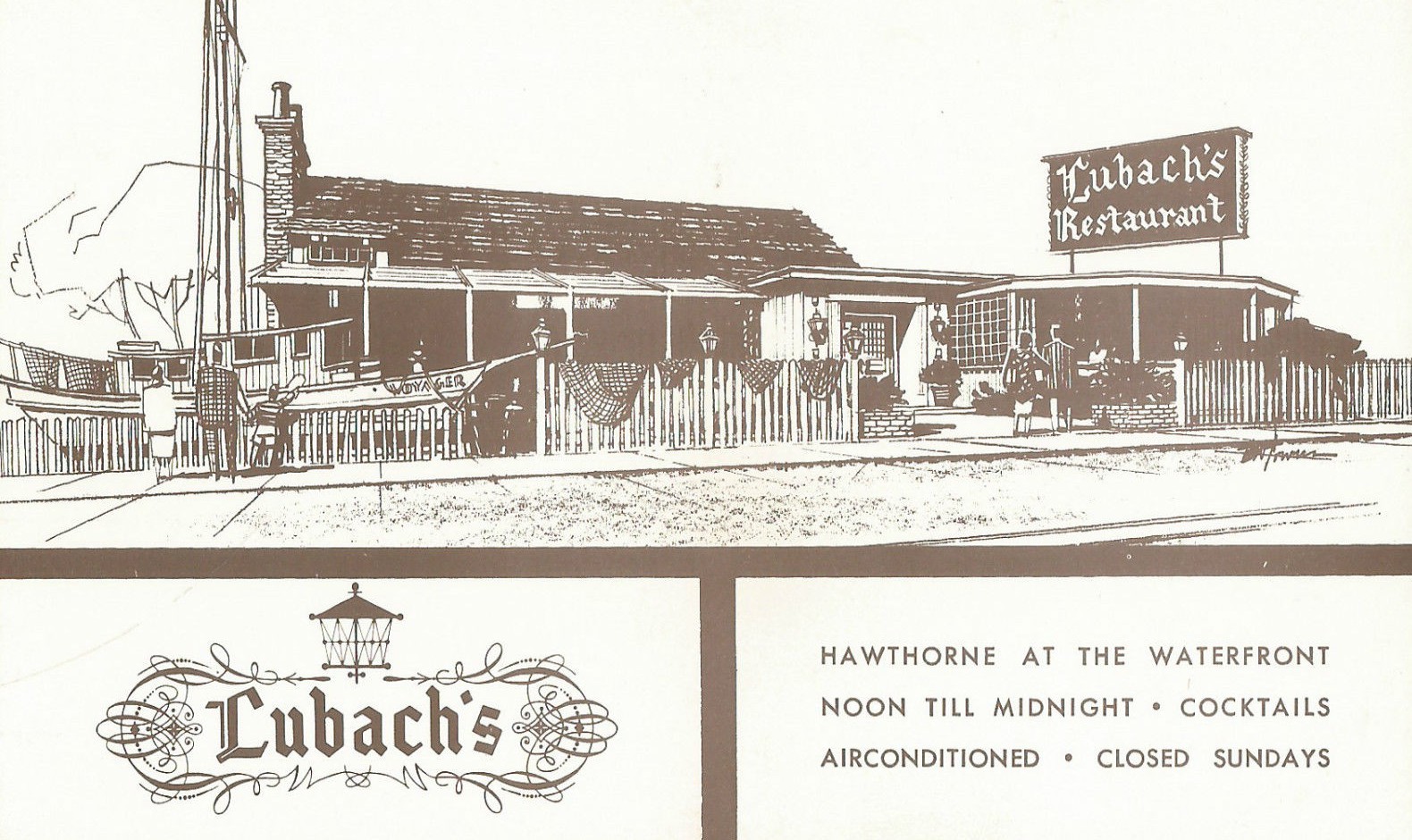 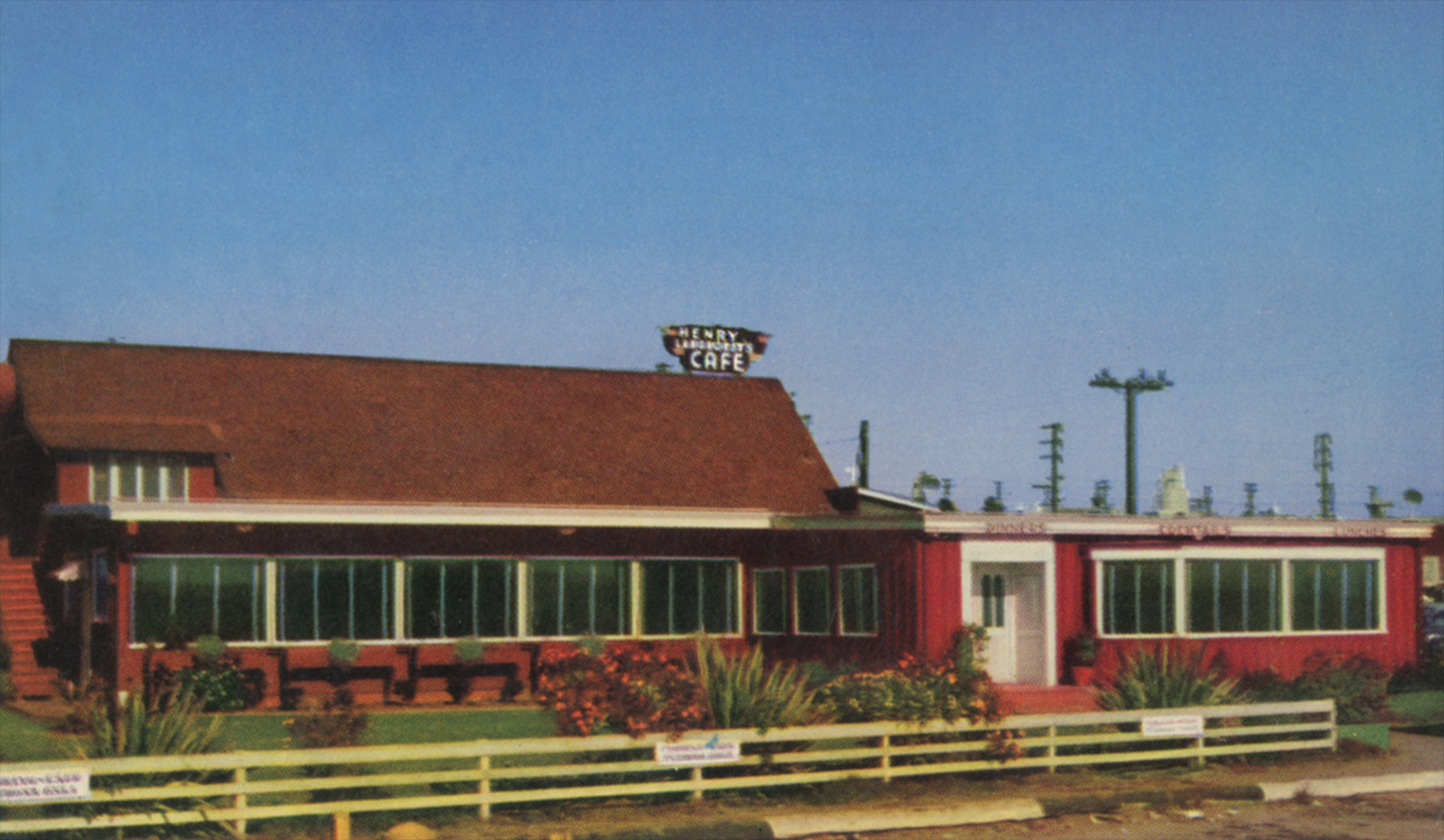 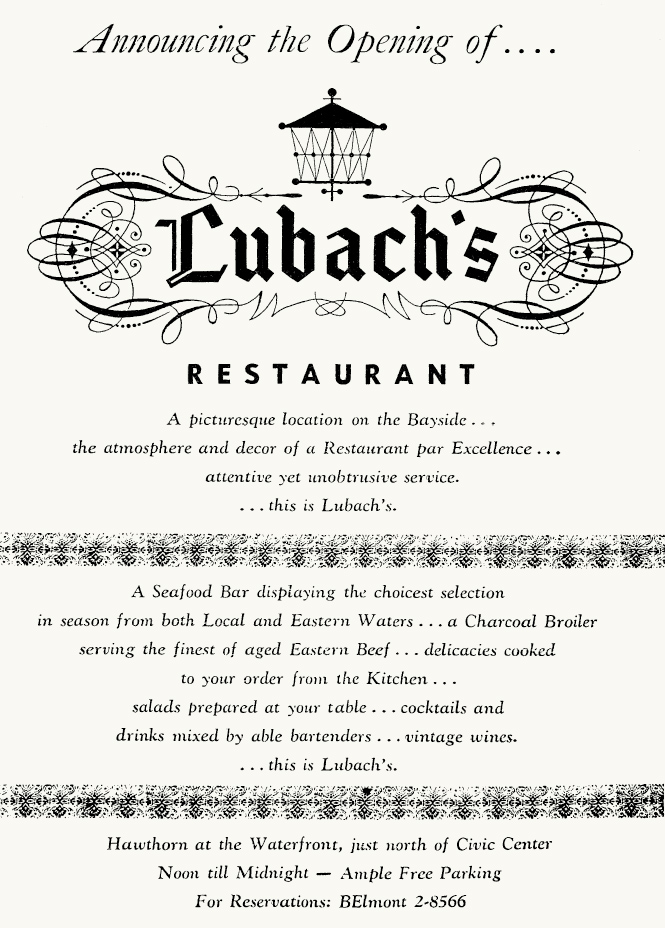 Ray Lubach’s place was known for its mock turtle soup, lobster Newberg, and other exotic a la carte items by chefs Hans Lindemann, who’d known Lubach since the Bel Aire Country Club in 1938, and Wilhelm Duren, a fellow Dutchman hailing from the Dutch East Indies. During the day, Duren worked for Solar Turbines as a lead structures packaging mechanic. Working with precision tools and aligning generator units, he led many training classes to new employees.

Items were served from carts and prepared tableside with much flourish by well-seasoned waiters. It was the perfect place to hunker down with business partners, or even with one’s mistress, have an expensive bottle of wine or a cocktail or two from bartender Frank Moran’s able shaker.

Over the years the business was run by Ray’s son, Rinse Bob Lubach.

Paul Metevier worked as a chef at Lubach’s for 16 years before succeeding Philippe Rousseau as executive chef in 1988. Previously, Metevier had worked for Atlas Hotels, opening the Islands Restaurant kitchen at the Hanalei Hotel. He managed the kitchen and honored special requests with the ability to tailor his continental cuisine to any palate.

“He knew all the judges, lawyers, and merchants who frequented the restaurant,” recalled Metevier’s wife, Emma. If something requested wasn’t on the menu, the servers would ask Metevier. “He would say,‘Sure.’ All they had to do was sit and wait awhile.”

As times changed though, Lubach’s did not. Their menu remained static. Business fell off.

“It just kept going down and down and down,” said Lubach in a 1990 interview. “Everything went up — insurance rates, liquor prices, everything. If you don’t meet the costs, what else are you going to do?”

He closed the restaurant that year.

Ray Lubach’s restaurant, sadly, is no longer there, but the memories live on. The building has since been reclaimed by the Solar Turbines learning center, where turbomachinery courses are provided to its customer base. Word on the street is that the building is to be demolished. 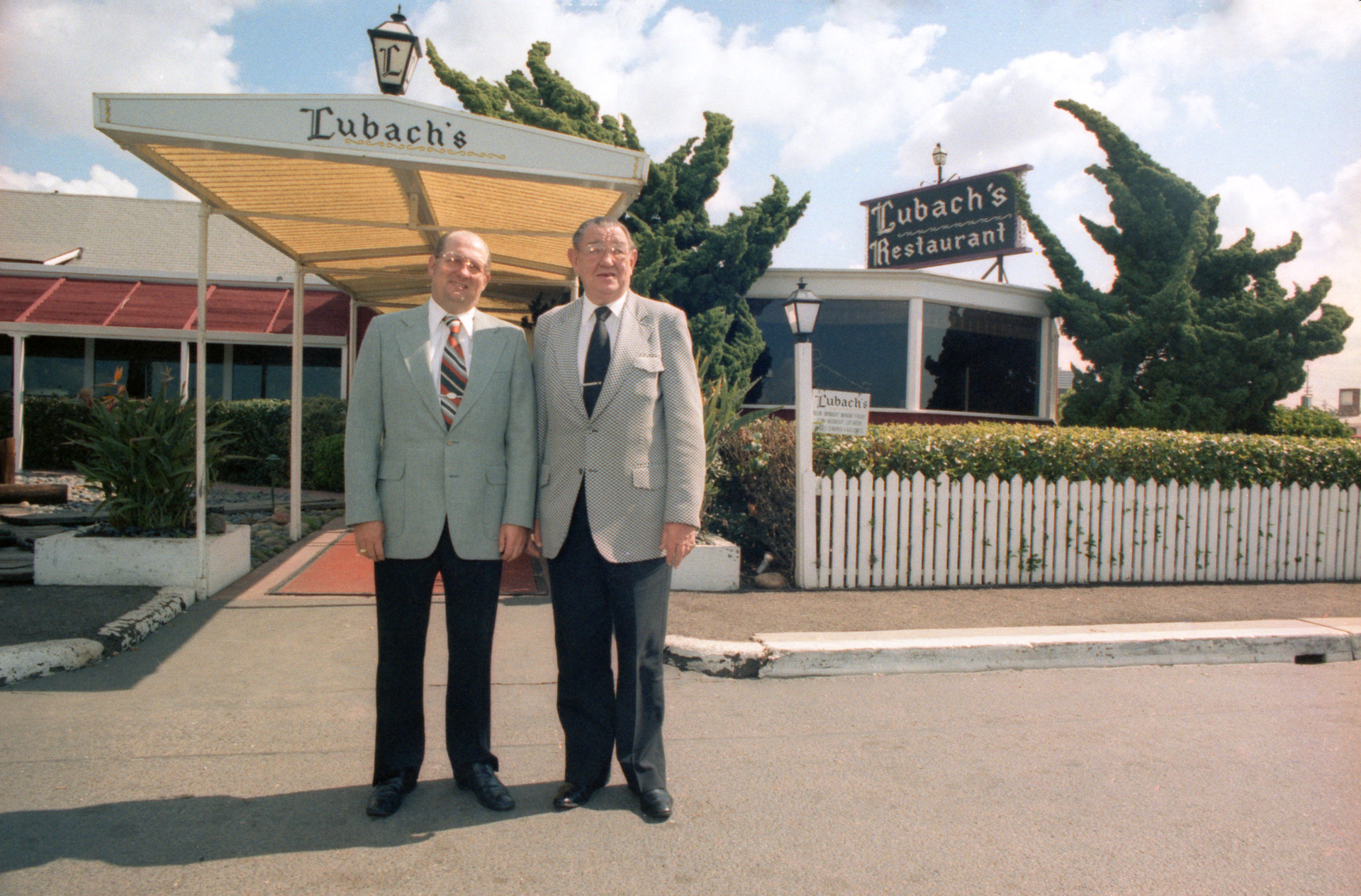 Bob and Ray Lubach, in front of their restaurant.

Recipe for Shrimp Cabrillo, grilled brochette with a spicy red sauce, from R.C.A. Lubach’s Restaurant, San Diego, California. This recipe was developed by Lubach while he was food and beverage director at the U.S. Grant Hotel. Shrimp Cabrillo was $2.35 when Lubach’s opened in 1956. 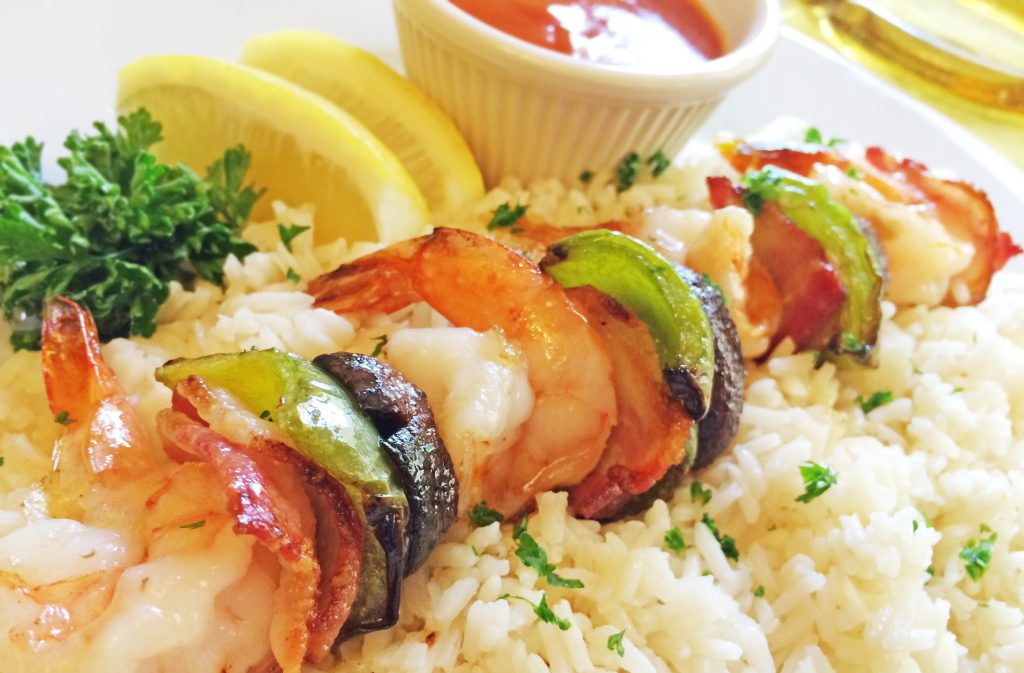 Peel, clean and de-vein shrimp. Prepare bacon and peppers. Rinse and trim stems from mushroom caps. Rub oil on shrimp. On skewers thread one shrimp, a piece of bacon, a piece of pepper, one mushroom and repeat, ending with a shrimp. This amount of ingredients fills about 6 (standard size) rotisserie skewers.

For the Cabrillo Sauce, melt butter in a medium saucepan and add other ingredients. Let simmer while broiling shrimp. [Editor’s note: this original recipe calls for just a little hot sauce, but feel free to add more to your taste.]

Broil shrimp skewers over charcoal about eight minutes on each side, or 15 minutes on a rotisserie. Shrimp should turn a nice pink, peppers slightly olive and mushrooms brown. Remove from fire.

[Editor’s note: If you don’t have a grill, bake in an oven or under broiler.]

Remove ingredients from skewers to warm pan or platter with melted butter on the bottom, and keep warm.

Allow about 4 to 6 shrimp per person and serve with sauce on the side. Garnish plate with parsley and lemon wedges. Steamed rice and a green salad are good accompaniments.

One thought on “Lubach’s Restaurant”