Tahiti Restaurant (1965) on Shelter Island, was never fully developed. It was supposed to be a lease-required component of Half Moon Inn. Developers Harold and Madeline Green were the property’s first leaseholders in 1957. They worked with architect Hiram Hudson Benedict to develop a hotel in keeping with Shelter Island’s required Polynesian theme. For years they tried to get the required financing, ultimately assigning their lease to investors Irvin Kahn, Ewart W. Goodwin and William Elser.

After a lot of back-and-forth finger-pointing and delays, the Port of San Diego almost canceled their agreement with leaseholder Elser. Turns out the soil of Shelter Island want not compacted enough for many of the architect’s initial plans, and the Port said just change them to drill deeper pilings. Negotiations on pricing, parking, and lease modifications went on and on.

In 1960 construction of the Half Moon Inn began in earnest, with the infusion of capital from the Irvin Kahn Group. Partners included Kahn, Goodwin, William Elser, Dr O.S. Harbaugh and Richard B Todd.

Stephen Crane of Beverly Hills’ The Luau fame was involved in initial talks for opening another of his Luau restaurants on Shelter Island, and even signed an agreement with Half Moon Inn. But there was already a Luau Restaurant in La Jolla. By 1961 Crane developed a version of his Ports O’ Call concept – one restaurant with multiple culturally-themed dining rooms. Ports O’ Call Dallas featured four distinct restaurants, each serving exotic food from a different region: Papeete, Singapore, Saigon and Macao.

“I actually got the idea for this restaurant in 1936 when I was attending the Olympics in Germany,” he said.

“There was a restaurant called The Four Seasons, which had four rooms — each decorated to represent a season of the year,” he continued. “It gave me the idea for a Ports of Call which would actually be four restaurants in one — each specializing in a certain kind of food.”

Crane, Richard Todd of the Half Moon Inn group, and Benedict presented concept drawings to the San Diego Harbor Commission and were given the go-ahead to develop full plans. The grand restaurant was designed by Delbert Edgar Long AIA and HH Benedict, of Benedict Associates, and estiamted to cost $500,000. As the plans were repeatedly revised and re-submitted, cost estimates shot up to $1 million, no doubt worrying the investors.

Then hotelier Del Webb opened up a can of worms saying his hotel for Mission Bay was to be called ‘Port of Call’ and he had the name before Stephen Crane. Both men were recalcitrant. After a week of feuding, Webb relinquished the name ‘Port of Call,’ ending his feud with Crane. He’d come up with a new name that day for his hotel — Del Webb’s OceanHouse.

In January of 1962, Irv Kahn was promoting ‘his’ $1.5 million project in newspaper ads. (The lowest construction bid they received was $1,555,000.) They had to raise half a million more to get it going and re-negotiated the construction schedule and terms of the lease.

By the summer, Stephen Crane was in the middle of a divorce. And Dick Todd was working toward complying with Port of San Diego lease requirements. Todd suggested national management to Half Moon Inn stockholders and solicited offers from hotel firms such as Sheraton Corporation of America. (At suggestion of Stephen Crane?)

Todd invited Ernest Henderson (Sheraton co-founder with Robert Moore) to San Diego to discuss possible management of the operation. By February of the next year, the deadline for construction had passed, and they were scrambling for financing. The Half Moon Inn stockholders voted to accept an offer from Sheraton Corporation, but no action was taken. ITT Sheraton would eventually buy Half Moon Inn in 1969.

Ewart Goodwin took command of the investment group and made single-minded decisions regarding “his” property. Irv Kahn was busy with other projects and seldom showed up to meetings. Dick Todd grew tired of Goodwin’s control of the group and ambivalence toward the restaurateurs. He privately complained to port commissioner John Bate, ‘As of this date nothing has been done. Being in a minority position, I can only bring in the offers, but even when they are accepted no action is taken.

‘I feel that one — and only one — man is responsible for this situation, Ewart Goodwin! Goodwin has broken about every corporate law that exists, and for what reason nobody knows. Irv Kahn also will not attend meetings, so it is difficult to obtain a quorum.

‘We need management on a national scale. We have it offered, but the business is being run like it was owned by Goodwin alone. People offer to build restaurants and they are are not even given the courtesy of a reply, Maurice Chatelain was an example.’

The San Diego Harbor Commission eventually allowed the French-Polynesian restaurant, renamed L’Escale, to go into a new $500,000 Tahitian-themed building instead. 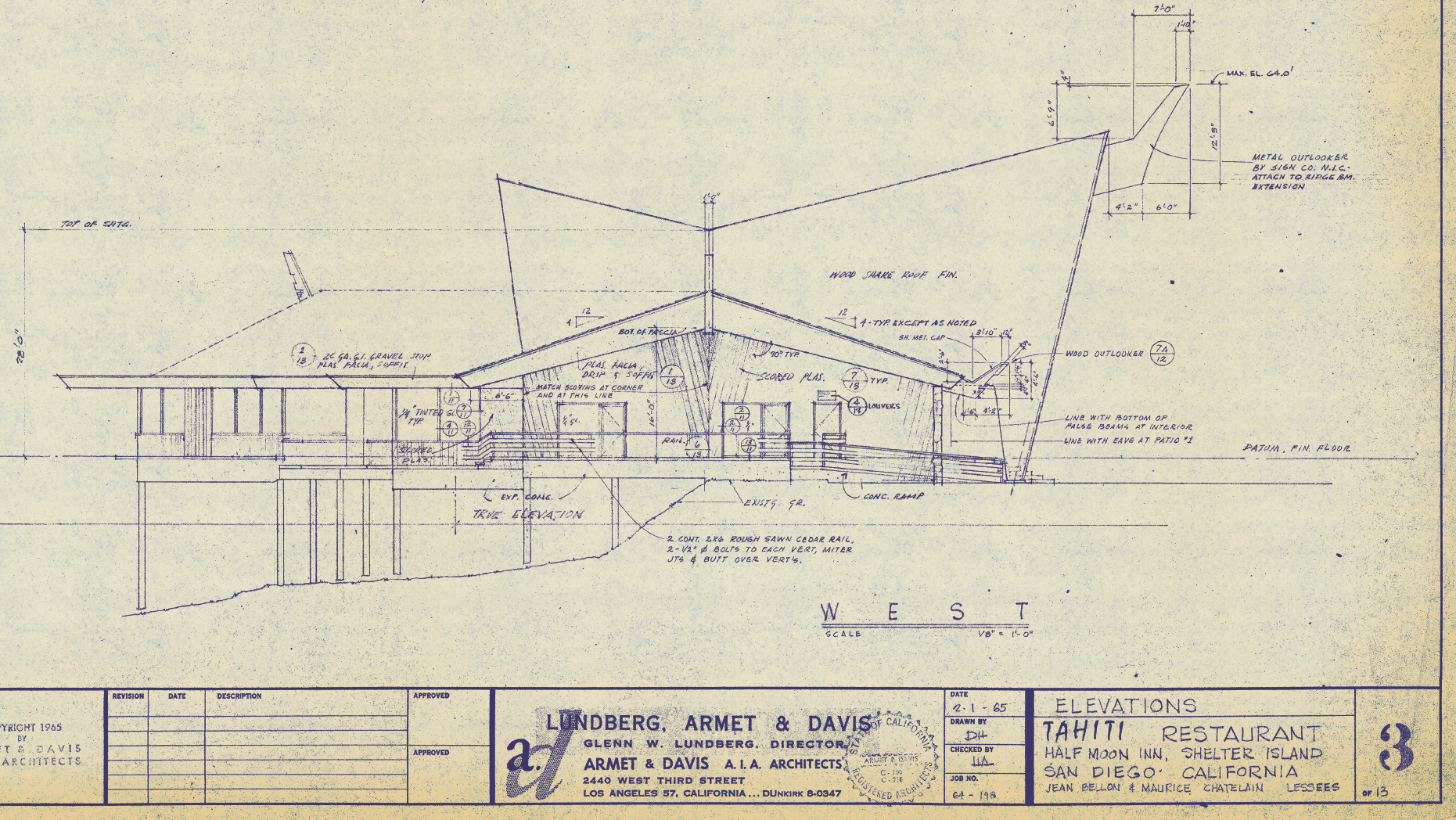 The restaurant was operated by Maurice Chatelain and funded by Jean Bellon (Villa Frascati, Hollywood).

Chef Maurice Galle stated on his menu ‘the essence of culinary art is time — we ask your kind indulgence.’ Tableside preparations flamed with cognac were de rigueur.

But the only things tiki about the restaurant were possibly their Long Island Duckling Tahiti — and the building. Rum drinks? No, but a great French wine list…

“A meal without wine is like a beautiful woman without a smile,” L’Escale menu.

One thought on “Tahiti Restaurant”