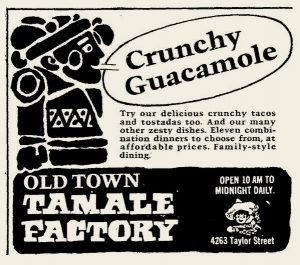 Old Town Tamale Factory (1918-1980s) started out as a window-service takeout place by Palomon R Robles, and grew into the first popular, full-fledged Mexican restaurant serving Old Town San Diego until Ramona’s Spanish Kitchen opened in the 1930s. Robles operated out of an old green house on Taylor Street. The structure had been Old Town’s first schoolhouse and was moved there years before. Old man Robles once shot a midnight intruder — the dead man turned out to be the notorious ‘Bedroom Bandit,’ an invader of more than 100 San Diego homes.

After Robles’ death in 1941, the Tamale Factory continued under the direction of his god-daughter Natividad Garcia and husband John Alton Todd until 1952 when the city acquired the land for the new Morena Blvd overpass. There was talk of demolishing the schoolhouse but it was saved, renovated and moved back to its original location on Mason Street in Old Town (State Registered Landmark No. 538).

The Todds re-opened their Tamale Factory in a new building across the street next and operated until 1979 when it became Eric’s Rib Place (now a motorcycle dealership).

Old Town Tamale Factory was of course known for their authentic tamales, but also for their large chile rellenos and a hot sauce so good ‘Johnny’ Todd said it ‘will make you want to eat more, if you are hungry — or not!’ They moved their restaurant once more to Congress Street until retiring. 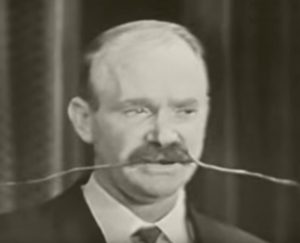 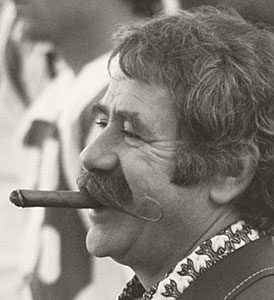 For years, Johnny Todd had a good-natured pogonotrophic competition with fellow restaurateur George Pernicano (Pernicano’s Casa di Baffi) as to who had the longest mustache. The two were featured in an episode of the popular TV show, I’ve Got A Secret, which aired on Movember 11, 1959.