Sure, wood-fired pizza ovens are all the rage right now. But chefs — can you imagine running a restaurant without the modern conveniences of electricity or natural gas? What would you do? How would that affect your culinary output? Can you imagine tending the fire, stoking the coal, continually sweeping up the ashes?

That was the reality for San Diego restaurateurs in the 1880s — or any cook for that matter. Wood, coal oil and coal-fired ovens were the norm. Oil lamps, natural and candle light were de rigeur.

Buy your fuel from old man Johnstone’s hay and coal store. Or from larger companies like Caledonia, Pacific Wood & Coal, Pioneer, or San Diego Coal. But don’t be late in your payment — you’ll get a visit from their collector, FF Garretson.

Coal distributors made fortunes shipping and supplying their product throughout the country. Although relatively scarce, local California coal was shipped from Contra Costa, Alameda and Monterey counties. And in the 1850s a group tried to mine coal on Point Loma, but went bust. Their open mine shaft was visible for a hundred years.

It has been recorded that Point Loma, like much of California’s coastal lands, was once covered in forests of original growth oak and scrub. In 1602, Spanish explorer Sebastián Vizcaíno described the woods on his mapping and surveying mission. It is he who named the lands ‘San Diego’ previously discovered by João Rodrigues Cabrilho.

In the mid-1800s, locals like Richard Henry Dana Jr regularly gathered firewood from ‘The Point.’ Indians harvested and sold the wood, using the old La Playa Trail to bring fuel to town. But by the 1870s the trees were pretty much used up by the area’s burgeoning population. (There is to this day a neighborhood on Point Loma named ‘The Wooded Area,’ reforested by Katherine Tingley when developing her Theosophical Society center, Lomaland.)

It wasn’t until 1881 that an entrepreneurial investment group founded the San Diego Gas Company, which provided petroleum-based gas to 89 subscribers in New Town San Diego. It was a messy affair — oil and tar routinely came through the mains. After a few years, they switched to produce gas from a nice, clean, modern coal-fired plant. The Gaslamp Quarter was borne. 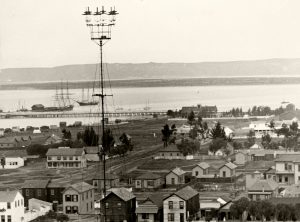 The first public streetlights were carbon arc lamps high atop towers. A lampman would travel from tower-to-tower on a bicycle to replace the carbon.

The first intercontinental railroad arrived in November of 1885, sparking interest in San Diego, and starting a mad land boom. It was a great time for new businesses in San Diego. Real estate sales were strong. Construction was up. Within three years, San Diego’s population surged from a quiet 4,000 to over 30,000!

In 1886 the Jenny Electrical Company erected San Diego’s first electric street lamps — 100-foot-tall towers equipped with carbon arc lamps that lighted blocks at a time. The company was bought the next year by Elisha Spurr Babcock, who used the technology to light his new transbay project, the Hotel del Coronado.

Businessmen Frank E Thomas and CE Thomas founded Eureka Combination Burner & Liquid Fuel Company of California with some associates. They took out patents for a new ‘non-exploding’ oil-fueled stove, and sought its promotion through the opening of their Liquid Fuel Lunch Room on the ground floor of the Hollister building at 1612-20 F Street. 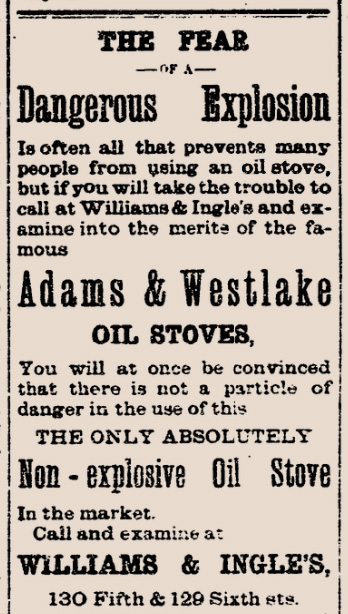 The inflammatory buzz-word ‘non-exploding’ was a big deal, and used in advertising by many manufacturers of liquid fuel stoves at the time.

Now, instead of constantly tending a smoky coal or wood fire you could have a continuously-fed, constant-temperature oven. It was great for baking.

Thomas invited prospects to the showroom/lunchroom at the corner of Seventh and F Streets, to see their marvelous contraption fired up three times a day. Have a soda for a nickel and stay for a hot, liquid-fuel-cooked meal. Mmmm…

The restaurant lasted ten years, from 1887 to 1897, and became quite popular. One ad in 1890 boasted they’d been under the same management for three years, ‘the only restaurant in this city of which this can be said.’

Thomas started serving dinners and changed the restaurant’s name to the Liquid Fuel Dining Room. There was even talk of opening up additional locations. Mrs Ellis ran the Hollister boarding house upstairs and sent her guests down for meals — Liquid Fuel served chicken or roast turkey and cranberry family meals on Sundays.

The Daily San Diegan suggested that if you ate a meal there, ‘you will know why the best class of residents and tourists patronize it. The table service, with spotless cover and dainty napkin give all appetite for the home cooked dishes which they serve…’

The Hollister building is long gone and today at the location stands the downtown Salvation Army building. 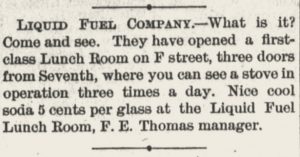 “short-lived land boom” The railroad’s arrival in San Diego, improvements in electric and gas utilities sparked a land boom in the area from 1886 to 1889. And with the boom came people. In 1885, San Diego’s population was about 4,000. In three years, it increased to 30,000. And by 1899 – a mass exodus decreased the population to 16,159. Yikes! No wonder so many businesses and restaurants went under. 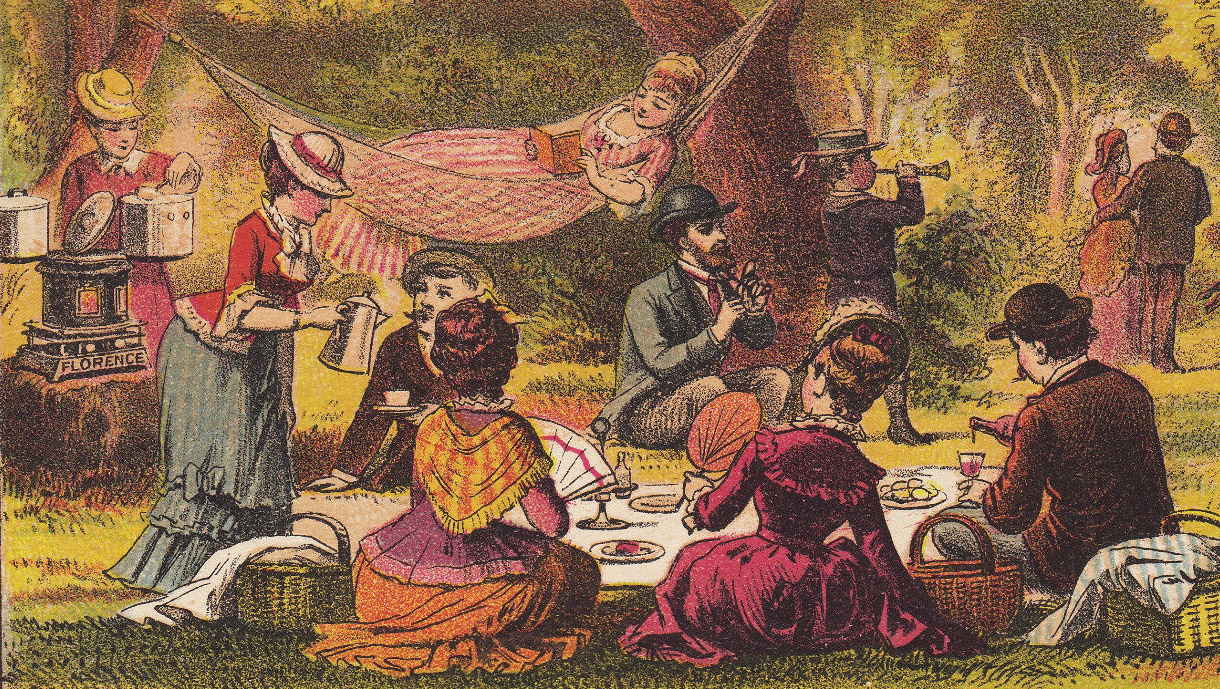