Jacks ran Bay City Cafe in Chula Vista for years until he was found guilty in a tainted liquor trial. After that in 1938, he and his family relocated to the island of Coronado, buying the Island Cafe.

“The front entry to the Island is through a bamboo and thatch doorway, flanked on each side by brightly decorated windows on which tropical plants are painted. The interior of the Island is typically South Seas in its fittings and provides a cool comfort to patrons which is immediately appreciated…

“From the booths along one side of the cafe the lighted murals are particularly attractive, being arranged in such a manner that they give the illusion of island distances and panoramas.

“Special changing lights add to the interesting atmosphere of the Island, and the punkah fans overhead heighten the tropic feel of the cafe and assure an even, cool temperature…” 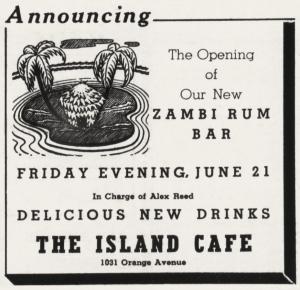 By 1940, they opened the Zambi Rum Bar under direction of bartender Alex Reed.

Earlier on, the Jacks’ son got a job at Consolidated Aircraft assembling fighter wings, later he worked for the phone company. Maybe it was the sight military aircraft continually flying around the island that impressed the young Douglas Arthur Jacks. When the war broke out, he enlisted in the Air Force. During the war as a pilot he served with distinction, completing over 60 missions and earning a Purple Heart.

By 1942, the Jacks sold their restaurant to Jimmie Calvert and Dr A.A. Auriado, but still owned the Mill Cafe at First and Orange.

The Jacks’ son married in March 1944 in Florida. Four months later, his plane went missing during the battle for Normandie, France. It took the family until 1948 to repatriate his remains to San Diego. By then his parents had sold the business, split up, remarried, and separately moved to Arcadia, California and Florida.

The Island Cafe continued on, but not with haunting Hawaiian melodies, but with the hip electric organ vibes of Danny Topaz (Valle’s), Roy Elliott (The Cotton Patch) and Scott Kincaid (Beachcomber). 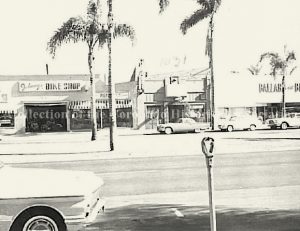