After he cashed out from his last Tijuana business (Original Caesar’s Place in the Hotel Comerciál) in mid-1936, Italian restaurateur Abelardo Cesare ‘Caesar’ Cardini (24 Feb 1896 – 3 Nov 1956) naturally thought of Hollywood for his next venture. For twelve wild years down in the devil’s playground, Caesar had flamboyantly catered to the whims of Hollywood royalty, sports stars, mobsters and politicians. It’s what he, brother Alessandro ‘Alex’ Cardini and partner Paul Della Maggiore were good at, and known for. 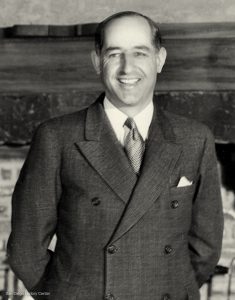 Those days were long gone — killed by the end of Prohibition, the deepening of the Great Depression, the building of California racetracks, and the Mexican government’s ban on gambling.

Alex’s ex-partner Paul Della Maggiora, son of San Diego hotelier and saloon owner Angelo Della Maggiora, thought likewise and moved on. As soon as Paul and Alex’s Fior d’Italia restaurant closed to make room for Original Caesar’s Place in Hotel Comerciál, he was out of the Cardini partnership. In 1934, Maggiora unsuccessfully tried out a nightclub in San Diego with some wannabe mobsters, the Stylianos. Later, he moved north to Los Angeles and opened Paul’s Duck Press restaurant, taking with him the popular house specialty ‘duck à la presse,’ and Caesar’s salad. His version was called ‘Romaine à la Paul.’

In the summer of 1936, local San Diego business leaders convinced Caesar to stay in the area, no doubt investing in the sure-thing deal. No records have yet been found of Caesar Cardini being granted liquor license for his cafe.

In fact, he was ineligible — although Caesar and his family had for years maintained a home in Chula Vista, only a few miles over the border from Tijuana, he had never applied for citizenship. It was his wife Camille who applied for all the restaurant licenses. Camille and Caesar had married in 1924 in Santa Anna, and from the beginning she took an active role in all their ventures.

Illinois-born Camille D Stump was a department store musician living in San Diego when she met Caesar. She came from a musical family — her two sisters and brother were also musicians. (Her brother Wilbur Lee Stump played in many bands down in Tijuana, and in San Francisco would become known as the originator of the piano bar.)

She got the liquor license. The restaurant was in her name as well, and Caesar was to be her manager. But when applying for the cabaret license, a San Diego City Councilman tried to deny her application saying that their marriage “deprived her of citizenship, as she took on the status of her husband, an alien.”

Upon reviewing the law, the councilman was duly put in his place, and the City Council granted her license. A local headline proclaimed “Caesar’s Wife Floors Roman Dictum, Obtains Dine-Dance License in S.D.”

In the beginnings of New Town San Diego in the early 1850s, one of the first fresh water wells was struck near Front and B Streets and, as historians have written, “the future of the new town” was assured. 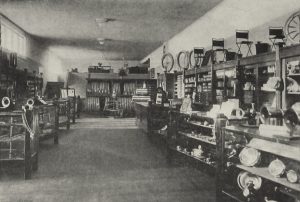 Amos Buckman and his wife, Frances, moved to San Diego and bought a house at that very same spot in 1872. Three years later, he heard about mineral springs in eastern San Diego County and moved to the rural area about 50 miles east of San Diego, now known as Buckman Springs.

In the 1920s, the building on the southeast corner of Front and B Streets housed an automobile parts supplier, Gavin-Williams Company. The surrounding neighborhood was composed of tire shops, warehouses, parking garages, and a Baptist church around the corner.

It was fertile ground on which to build his first San Diego venture. Front and B was uptown from the Plaza, but affordable to procure — and only blocks from the train station. With several thousand dollars, Cardini remodeled the old garage into a swanky new nightclub boasting interiors designed by Pear Pearson. He called it the Caesar Cardini Cafe, hoping to cash in on his name’s Prohibition-era drawing power. 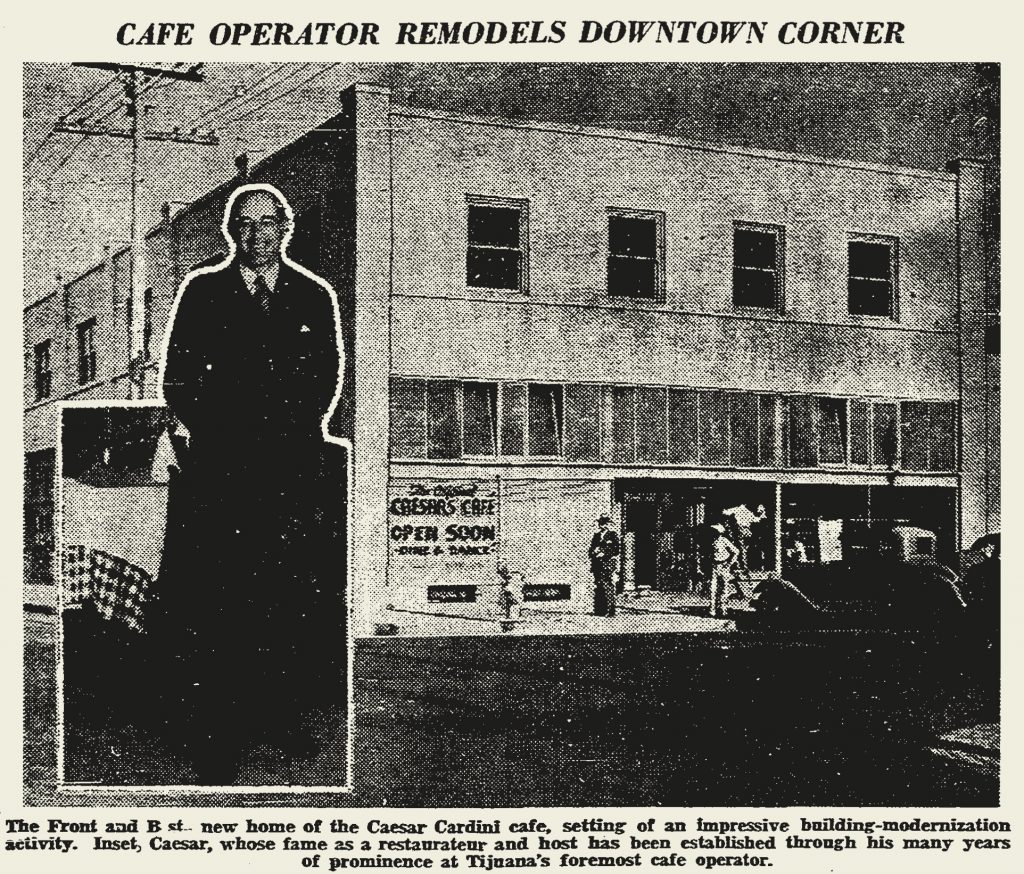 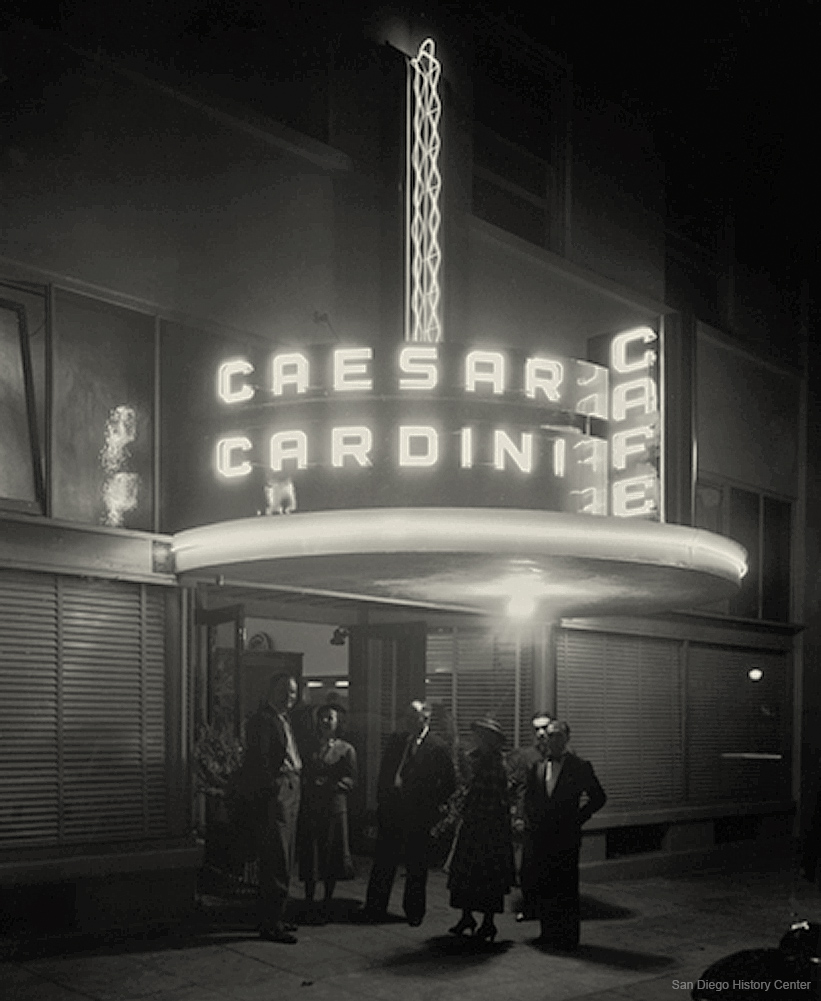 The orchestra pit was tucked up in a balcony overlooking the large wooden dance floor. Cardini engaged Jay Eslick and his orchestra, with Eslick as master of ceremonies. Eslick had just finished a long engagement at dapper mobster Paul Mirabile’s nearby cafe, Paul’s Cafe, and was very popular all around — a ‘drinking-buddy-of-Bing-Crosby’ type.

Paul Mirable played the legit businessman, but his brother Tony? He came from the Detroit mob, and set up operations in Tijuana. Antonio ‘Papa Tony’ Mirable owned the Midnight Frolics Club in Tijuana, among others in San Diego, and knew the Cardinis. His specialty was loansharking, and when clients couldn’t pay his high rates, he reduced the balance due for percentages of the business. At one time Mirable said he wanted to own a piece of every bar and club in San Diego. Neighbors…

There were three nightly floorshows, headlined by Armandita Chirot, coloratura soprano from the Los Angeles opera and Mexico City grand operas. Also dancing the nights away was the famous ballroom team of Ricardo and Inez.

The ground floor featured high-backed ‘inglenook’ booths, tables and a counter for service. Upstairs was a cocktail lounge and banquet hall.

Cardini had enjoyed offering very large and extensive wine and spirits selection in all his ventures. So Caesar called on his associate from the Tijuana days, Samuel Tokman, to run his beverage program and offer “properly prepared drinks.” Mixed drinks before six o’clock were 25¢ each, now that’s a happy hour.

Classic French and Italian cuisine was featured, of course, with wild game specials, lobster Thermidor advertised “as only Caesar knows how to make it.”

Although his ‘royal chef’ was not mentioned by name, Caesar’s other brothers Nereo F. Cardini and Gaudencio Cardini were surely included. Gaudencio had joined Alex and Caesar in Tijuana when they opened Original Caesar’s Place. Nereo followed, soon after establishing his Nereo Firenze Hotel upstate near the Santa Cruz Casino.

With everything going for it, the Caesar Cardini Cafe lasted just six months.

Showman that he was, he was not the best businessman. He bowed to pressure from home-grown mobsters that didn’t want the competition. In November, Cardini’s musicians were threatened, one even at his own at home. As reported to District Attorney Thomas Whelan, upon hearing the musician was not afraid of them, one thug said, “but you have a little girl you wouldn’t want harmed…”

The very next month the Jay Eslick orchestra was gone, replaced by baritone Pierre White and his band, who’d closed the season on the ill-fated gambling ship S.S. Monte Carlo in October. They stayed on a month, but left to Howard’s Cafe for what White though would be an extended run. Matt Howard’s cafe was closed abruptly in 1937 amidst a scandalous case involving theft and extortion.

By March of 1937, Cardini tried drumming up business with offers of free spaghetti dinners. But the strong-arm tactics of ‘jealous competitors’ had done their job. He closed the nightclub shortly thereafter.

The building no longer exists. On this site, ironically, now stands the San Diego County Jail. 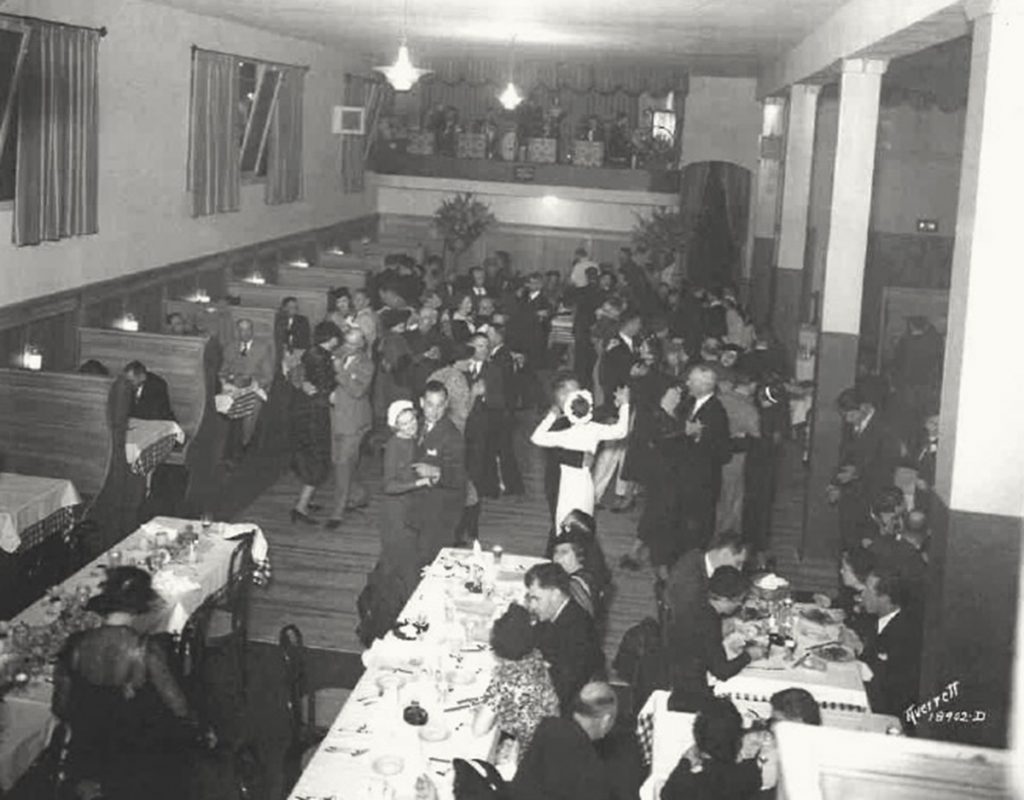 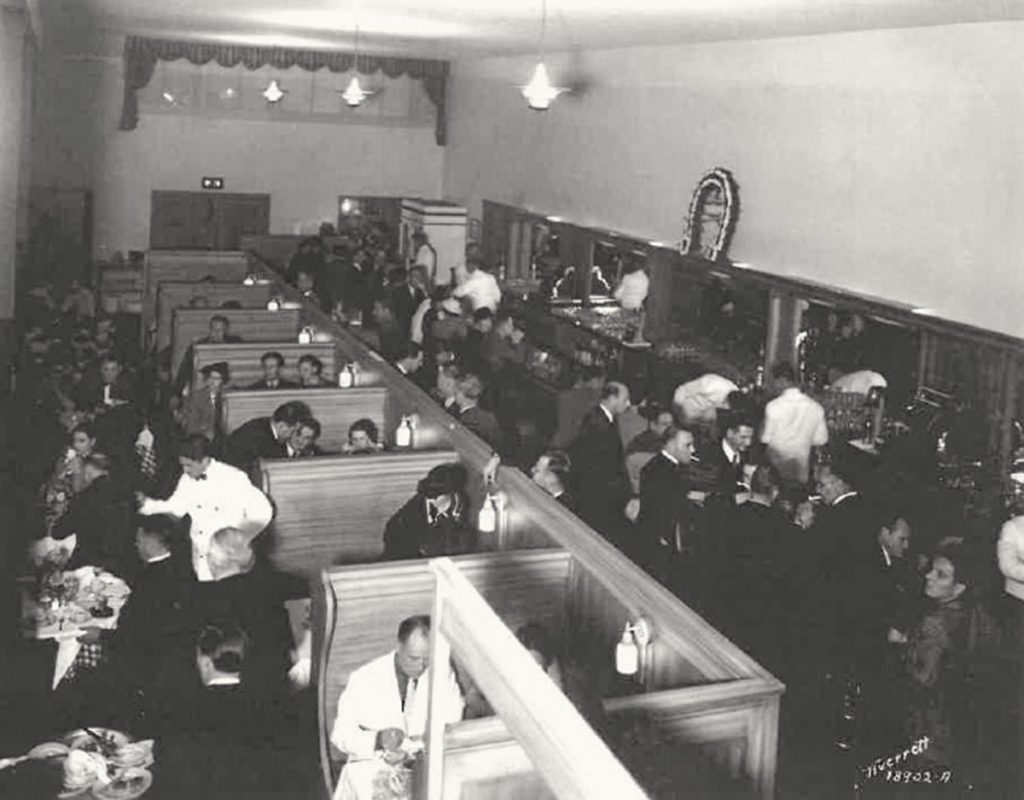 After his cafe closed, Cardini immediately went into a succession of partnerships to run the popular Tavern Hacienda at University and 47th, and the Beacon Inn in Cardiff. In 1938, he opened up his large home in Chula Vista for private functions — the Caesar Cardini Villa — serving 50¢ meals.

By the next year, Cardini had given up on San Diego and moved north to Los Angeles, proprietor of a Montclair liquor store. He bottled his salad dressing, and as recollected by his daughter Rosa, sold it from the back of their station wagon at farmers markets.

He ultimately ended up with his own store on La Cienega Blvd, Caesar Cardini Foods. Old patrons who remembered him from the ‘salad days’ visited Cardini. Some even brought empty bottles for refills of his dressing. Caesar Cardini died in 1954. His daughter Rosa trademarked the name, and eventually grew the salad dressing business into a multi-million dollar concern.

His big plans for opening a hot nightclub in Hollywood? They never materialized.

But his name lives on in Caesar’s Salad… 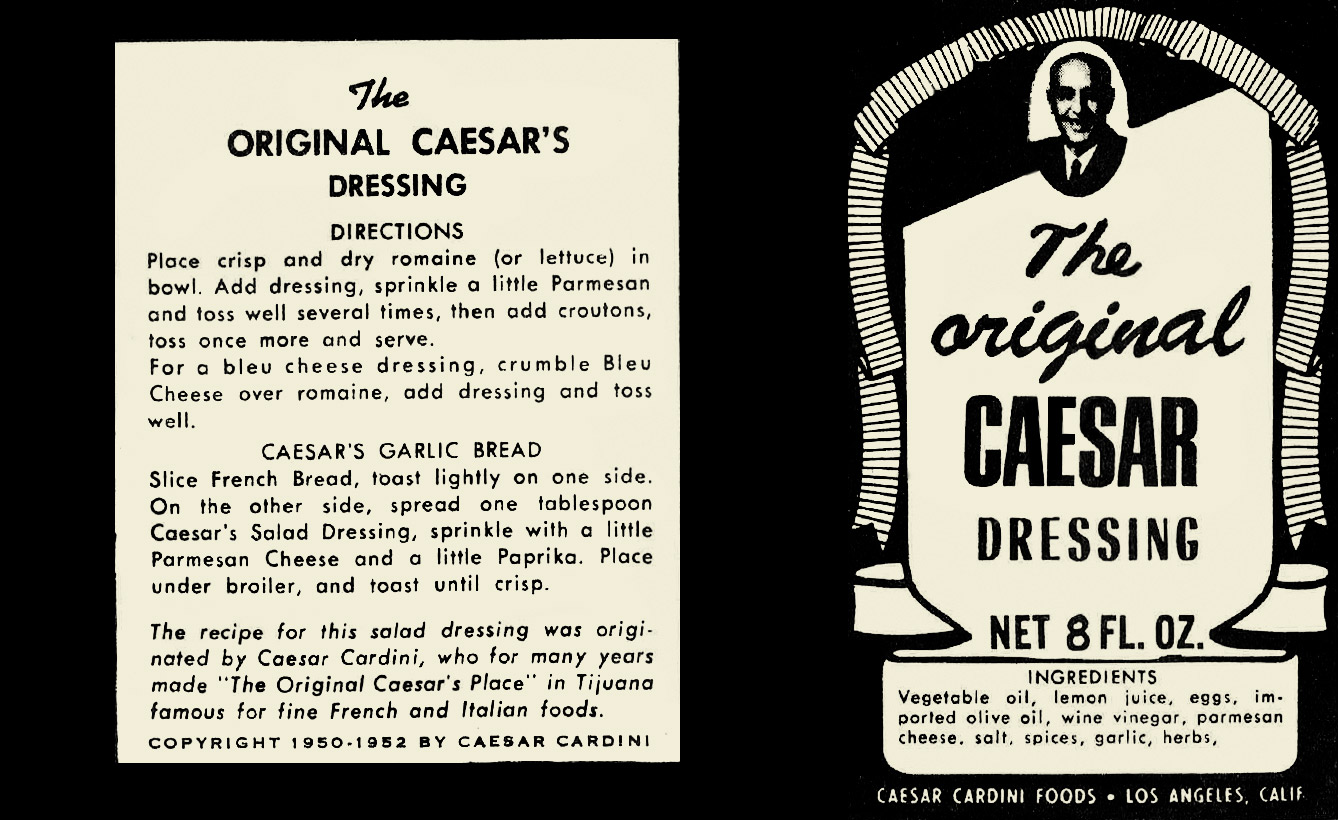 The Original Recipe for Caesar’s Salad

Here is the Caesar Cardini version of the recipe for Caesar’s salad, as published by his daughter Rosa Cardini in 1986. This differs from Alex Cardini’s, Julia Child’s and other later versions, as well as that of today’s Caesar’s Restaurant in Tijuana.

Then pour garlic flavored oil over the lettuce.

Sprinkle pepper and salt over the lettuce and gently toss two or three times.

“ban on gambling” After President Cardenas announced his ban on Mexican gambling, it effectively shut down whole resorts like Agua Caliente and the Foreign Club. Most all Tijuana resorts including Cardini’s relied on casino gaming for income. Cardini and other business owners pled unsuccessfully with Governor Gabriel Gavira to issue permits for modified gambling games. The Foreign Club burned down in November 1935. San Diego Union, 22 Jul 1935; 23 Jul 1935; 19 Jun 1936. La Prensa, 27 Jul 1935.

“known for” Edson R. Waite, ‘Did you ever stop and think,’ Greenfield Daily Reporter, and Edinburg Daily Courier, 11 Jan 1932.

“stay in the area” San Diego newspaper reports and records of city building and electrical permits, 1936.

“the Stylianos” Hog ranch farmer George Styliano backed his wife Genell’s entry into San Diego’s club world, with money made by lucrative rubbish collection contracts with the city. Genell was touted as San Diego’s first female nightclub owner. Club Styliano failed and was bought out by an ex-sheriff’s deputy, Matt J. Howard. His art deco triumph was said to be the best of the San Diego nightclubs in the 1930s. In 1946 the Stylianos leased Paris Inn from owner Jimmy Kennedy, ran it into the ground and eventually lost everything through lawsuits and trustee sales.