The couple founded Associated Artists, the leading commercial art association in San Diego at the time. Both artists created work promoting San Diego tourism for the city’s convention and visitors’ bureau in the 1920s. As a graphic designer she was anonymous, but as an illustrator she became more widely known for San Diego Magazine and San Diego Club Women covers.

The Northridges moved to San Francisco in 1929 to further their artistic educations. 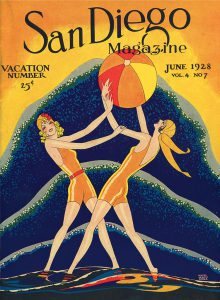